I'm backlogged by about a month and a half which means you'll be seeing pictures of Hannah in her three-headed dragon Halloween costume at the height of the Christmas season unless I kick it into gear.

Eric was supposed to be gone for the month of October so I spent September filling the calendar with activities. The first weekend was going to be a ladies and babies camping extravaganza with the us, Mary Cate, and Amy, Zoey, and Nelso. I was terrified of taking Hannah camping for her first 2 years of life given how prone she was to choosing screams over sleep (I wasn't willing to do anything that might make life any more stressful or sleepless than it already was), but when we finally did take her on her first trip, she did great. Eric took her a couple more times last summer while I graded papers for a class I was teaching, but having a new baby this summer meant the tent stayed folded up in the garage.

I didn't want to have another 2 years pass before we dusted off the tent. Like going to the grocery store, once you've done it a few times with kids, you figure out your routine and it stops being daunting. The trick is to get the first few times over with as quickly as possible so you can figure out what to never do again. That's how you earn your mama badges; you just screw up royally a few times until you figure out and graduate into "seasoned" status.

Unfortunately, it wasn't just that I had to learn how to camp with kids. I had to re-learn how to camp. Eric and I camped in Zion for close to a week shortly before we got pregnant, and I'd like to add that this trip included a 2-day backpacking adventure in The Narrows. This is my one and only hardcore camping moment, but aside from the fact that I hiked that river for 2 days in spite of the knife stabbing pain in my severely infected toe, I was not at all hardcore. In fact, I was the anti-hardcore. This is my second-most embarrassing lifetime moment: when it got dark, I was afraid to leave the tent. I huddled up in the sleeping bag with my infected toe and my fatigued body and let my mind imagine wild animals with sharp teeth and no one around for miles and miles and miles and this city girl pretty much freaked out. Yes, I am afraid of the real dark. Sure, I keep my bedroom as dark as possible with as many shades drawn as I can fit on the window, but that's because no matter what you do, real dark does not exist in the city.

Other than Zion, the vast majority of the camping I have done in my life was at music festivals throughout my teen years and early to mid 20s, and although I had my own tent and gear and could set up and tear down and fend for myself, that was a lifetime ago and my trusty tent is MIA.

So not only do I not have a parent-child camping routine, but I also don't have my own individual routine as a starting base. Therein was the reason for my apprehension.

Eric has two tents. One is a two-person tent that fits me and Hannah fine but not the baby (we set it up in the dining room to check), and the other is this enormous 15-person castle that is totally intimidating, and that I am totally not interested in learning to set up.

The thing about me is that I don't like to be intimidated and apprehensive. The ideal me takes the kids camping on the regular and is an EXPERT, so when my neighbors suggested a camping trip, I jumped at the opportunity to start establishing my parent-child camping routine. I blocked off that weekend on the calendar and started shopping for a more manageable tent, one I could have ownership of and could confidently set up and tear down by myself like I did in my 20s. I loved that sense of independence, and I want it back.

I never found the tent though. Eric wanted me to get something that the whole family could still use for years to come and all of those are big and expensive which totally defeated the purpose of getting a new one, and then Eric's trip ended up being postponed so we invited the guys on our ladies and babies camping trip, and he set up the castle. And also the "kitchen" (aka, the screen tent). And voila: our Gucci campsite. 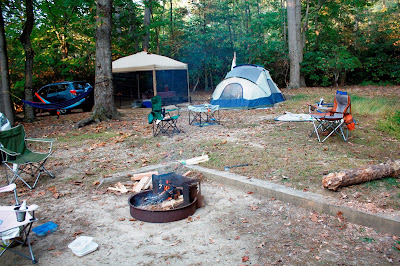 The neighbors usually go to Green Ridge, but I wasn't feeling that brave. It's 2 hours from here (127 miles), and although Jacob does pretty well in the car, that's a lot of time to spend in the car for 1 night. Plus, I needed to know that if it got crazy, I could bail and just go home easily enough. I wanted to leave myself that out. Also, and I'm a little ashamed to admit this, though no more so than admitting that I'm afraid of the dark and spent my night in the Narrows hiding in a tent instead of looking at the stars, but I'm on a roll so I'll also admit that I am just not in a place in my life right now where I'm okay with willingly walking into a situation in which I have to poop in the woods. If it has to be done, fine, but I don't want to sign up for it. I need to build back up to that status. In the meantime, I want to cheat and camp at places that have bath houses. I wanted to know that running water was an option should anyone decide to roll in mud or have the kind of explosive poop that finds its way out of all diapers.

As it turns out, there are a ton of state parks within an hour of our house, all of which I intend to explore. It'd be cool if as a teenager, Hannah knew all the area state parks like the back of her hand, like they were her neighborhood her something. For our maiden voyage, we ended up at Elk Neck State Park which is on the water just south of the Delaware line about an hour and 15 minutes from here.

Our campsites were perfect because they were right next to each other and not separated by trees or anything. It would have sucked if we didn't know each other, but it was perfect for our purposes. 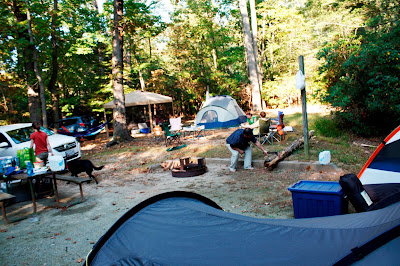 We got all set up and then Eric and Hannah chilled by the fire while Amy and I took the little ones on a hike. 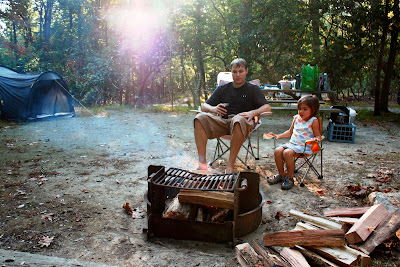 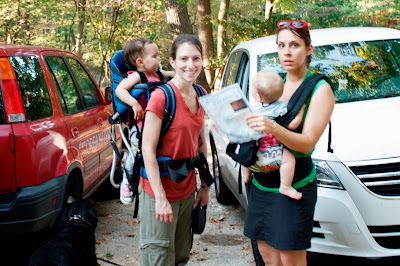 Night with Hannah was awesome. We hung out by the bath house for a while watching the billions of tiny frogs jumping around and caught a few to bring back to the campsite. We watched a little reptile of some sort peek his head out of a crack in the sidewalk there and smell the air with his tongue. We turned off our flashlights on the darkest part of the trail where we couldn't see either the bath house or our camp site and spooked ourselves. We counted stars and taught her how to wish on them. We watched the fire flicker and licked s'mores from our fingers. I got lots of much needed quality time with her.

She played with her brother in the hammock the next morning. 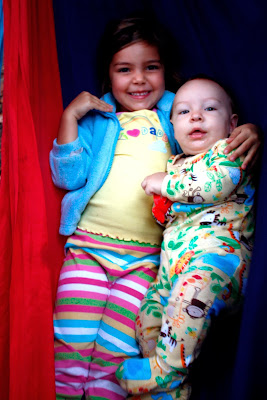 And drank blueberry Odwalla by the morning fire. 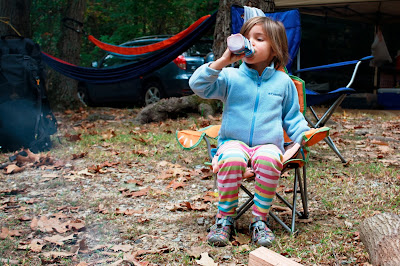 And shared sparklers with Zoey until the campsite was full of smoke and smelled terrible. 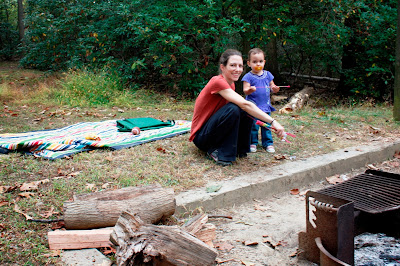 I hung out in my pjs while the baby took his morning nap and got in some much-need laughter with MC. 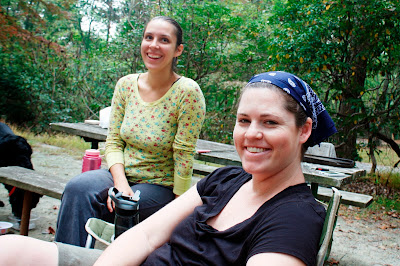 When the baby woke up, we started breaking down and packing up. Hannah entertained herself by hopping on this pair of trees like they were a pair of skies. 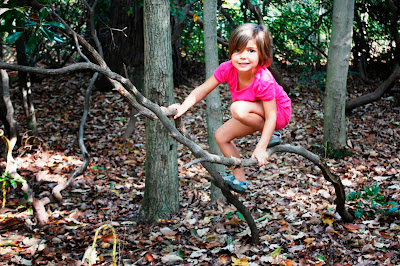 We pulled out lunch before leaving. I spent a lot of time cooking before our trip to Assateague, and it was great, but I didn't want to do that again, so I cheated and went to Whole Foods to stock up on sandwiches and snacks and even some superfood instant oatmeal. It was great. I'm not usually one to cut corners, but I've been trying it out lately, and as it turns out, it hasn't killed me to lower the expectations I have of myself a little bit. 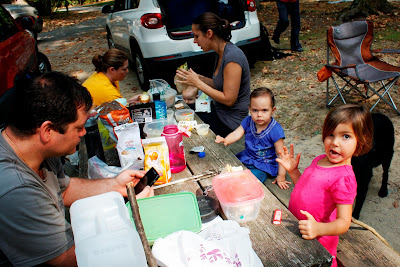 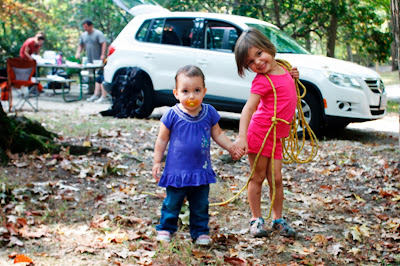 After lunch, we packed up the cars and headed to the trail that circled the pond. The write-up in the brochure made it sound scenic, and it was only supposed to be about a mile loop. I'm pretty sure it was a lot farther than that, and the pond was hidden behind trees and foliage pretty much the whole time, but it was nice anyway. Amy had lost her keys so we took Nelson and our kids and got a head start on the trail while her and MC and John returned to the campsite to dig around. We took a turn off the path at one point, walking toward the pond, and I let out the slack on Nelson's leash so he could run. When I caught up to him, he was swimming. Moments like that make me look forward to the day that we have a dog and can take him hiking. 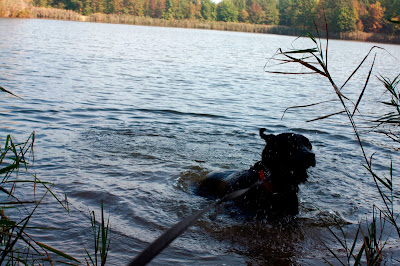 These next two top my favorites list. I love it when I capture my crazy family being crazy. 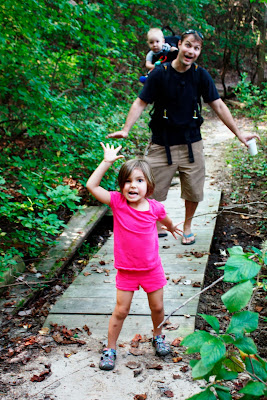 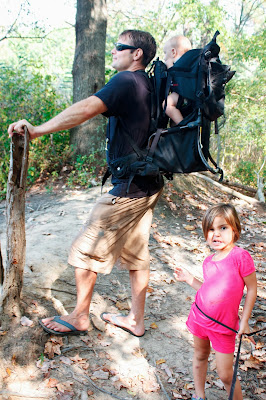 Jacob passed out in what could not have been a comfortable position. I feel bad for not protecting his sleep as much as I protected Hannah's, especially since he actually likes to sleep and really loves to lay down in his bed and snooze away.... 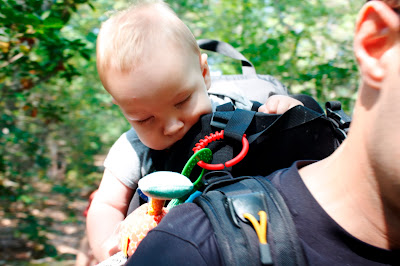 John worked up a sweat practicing his soon-to-be daddy skills by toting Zoey around. 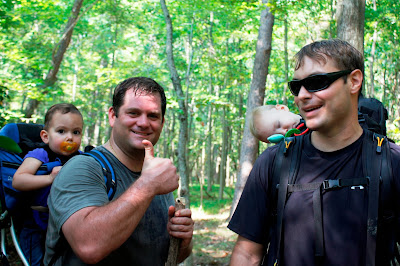 After our hike, I insisted on seeing the beach before heading back to the city. I waded in mid-thigh, but Hannah and Eric put on their suits and swam out, rinsing off the sweat and dirt from our hike...it must have been so refreshing...I should have put on my suit... 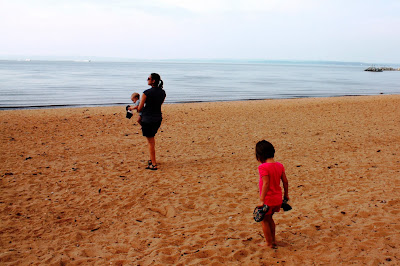 We drove home feeling a billion times better. Eric said he'd heard a show on the radio about how there is a science behind needing to be outside in nature. I can't remember what he said, but it was something about a charge, a positive charge that you get only by being in nature, and you really get off kilter without it. I think that's obvious based on my own personal experiences and on how much better I feel after getting outside and away from the concrete jungle for a while, and I'm guessing that it's something the majority of the world agrees with, but even with that common sense knowledge, I still learning the science behind it is fascinating. Eric said that someone made a bracelet that is purported to provide that same positive charge (or whatever--I can't remember his terminology), and if that's the case, I think they should pass them out like candy on Halloween to all city dwellers, especially those who don't have the means to escape.

I'm so grateful that we have the means to to escape. We love walking around our 'hood, but it is critical to our mental health to get out of there on a regular basis. Our maiden camping voyage with Jacob was a success, and I'm looking forward to the next trip!
Posted by terri at 11:03 PM