On the back of an elephant

We wrapped up September with a visit to the Renaissance Festival for a day of face painting, dress up, crowd control, elephant rides, and the mandatory turkey leg followed by at least three mandatory bottles of water to wash down all that salt. My family joined us this year, so Hannah got to pal around with Clay.


Like last year, we took advantage of the free pony rides. 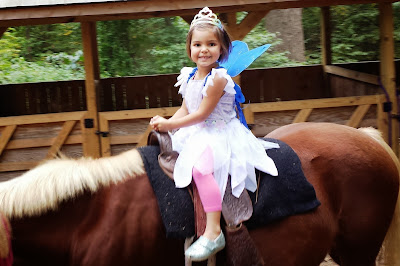 Clay's first pony got a little skitterish and crazy, so one of the employees snatched him off quickly and plopped him onto a much calmer pony. He wasn't thrilled with that experience, even after getting the calm pony. 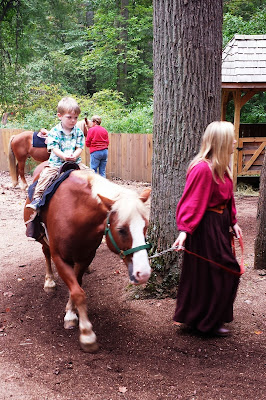 I don't know why it is that with as many shows as they have that the Squire on the Wire is pretty much the only one we see year after year, but it's fine because he's pretty darn funny (we don't seek him out; it just happens that we're always there). This year he asked for a 4-year-old volunteer. A very specific age...Hannah's specific age. She raised her hand and got picked. He had two tight ropes  and told the audience that he would walk on the highest wire and then asked Hannah which was the highest. She pointed to the highest, and he tried to convince her that the other one was the highest and tried to trick her into pointing to that one instead. The comedy was way over her head, and she was a bit confused about why this adult seemed so insistent that the short one was the high one, but he ended up giving her a dollar so she walked away smiling. 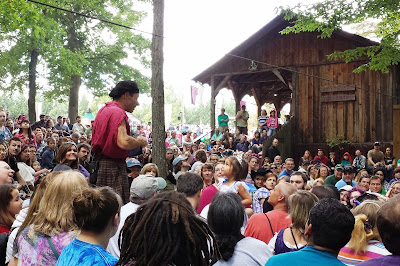 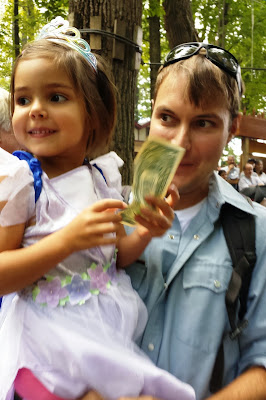 In addition to being in her first show, Hannah had her first elephant ride. Shortly after we got in line, a little girl riding solo got in line behind us (I was told a parent had to ride with kids that young, but I guess they made an exception for her). She wasn't much older than Hannah and Clay so we let her join our little party. Hannah really wanted to ride in the front, and I saw no reason for her not to so we sandwiched the random girl between Hannah and Clay. She didn't mind at all. This is one of those photos that we'll look at 10 years from now and say, "who's that kid??" And the answer won't be that entertaining, but a picture that starts a conversation beyond "awww!" is always fun. 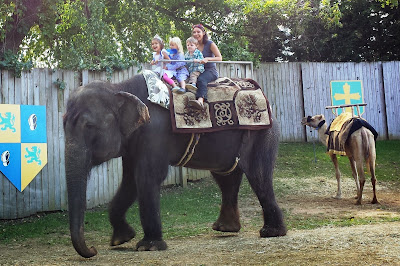 Some things, like riding the ponies and the giant wooden slide, we'll probably do every year. Other things, like participating in shows and riding an elephant, add an extra uumph of special to an already fun day.