Making space for baby: Bookshelves and a home birth center

Although I'm not sure I'll ever be ready ready for the potential chaos of a growing family, technically speaking, we're actually pretty ready. Not that it matters--as we discovered with Hannah, babies need surprisingly little. Since we were remodeling the house while I was pregnant with her, her room had become a stash-it spot for all sorts of random stuff (and it remained a stash-it spot for at least a year). In the last couple of weeks of Hannah's time in utero, Eric ripped out the upstairs bathroom, meaning that in the middle of the night, when my super squashed bladder complained about the three drops of urine it held, I had to hobble up and down two flights of steps to the newly finished bathroom in the basement.  I didn't even have all the stuff off the registry that we needed (like diapers--not a popular gift to receive at a baby shower in spite of it being pretty much the only thing you need other than a working set of boobs).

This time around we needed far less stuff so the to-do list mostly consisted of pulling things out of storage, wiping off the dust, and washing covers when applicable. Check.

Making space for Hannah was a challenge. It took us a couple of years to realize that she was going to be around for a while and that she had stuff that we needed to make room for. We started out small and bought a six-cube organizing shelf thing from Target to keep things in the dining room. In spite of never having any big birthday parties for her, she accumulated stuff out the wazoo and in no time, the organizing shelf was overflowing. I tried culling down, but...most of it is arts and crafts stuff that we use.  So I did what any reasonable person would do and begged my husband to build me some sky-high shelves. It's a row home; we've gotta go vertical baby!

Lucky for us, Joel was around for a while over the holidays and was happy to have a wood-working project to keep him busy. He spent a couple of days putting it together and I wasted no time moving stuff into it. Eric still needs to add the trim and stain the shelves so they match the kitchen cabinets, but it could be a while before that happens, and there's no room for all that stuff to just sit around in the meantime.

I love having the space to spread out and be organized and love it that Hannah can access all her stuff more easily because now that she can see it, she actually plays with it. It's a very Montessori set up. 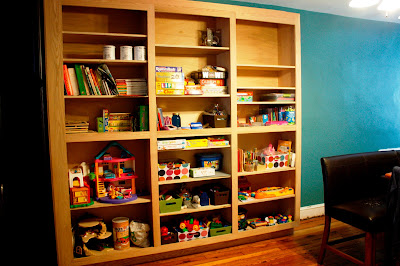 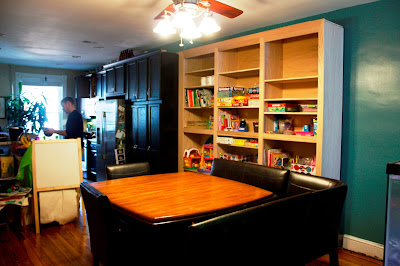 Prior to the shelves, I went to town on Hannah's room, making room for baby brother. We'll be kicking it old-school style up in here and having the kids share a room. The only other option is to stash one of them in the basement, but as I learned while pregnant with Hannah, schlepping up and down those stairs in the middle of the night is incredibly un-fun.

So I moved Hannah's clothes out of her dresser and into her closet. We added a few more shelves to make organizing possible, and the end result is that all of her clothes are now in one place which I think makes it easier for her to get dressed, AND she has an easier time finding clothes on shelves than she did rooting through deep dresser drawers.

After emptying out the dresser, I busied myself filling it up with baby clothes. We inherited multiple trash bags full of clothes that Clay and Mason have grown out of, and I spent days sorting them by size, stashing most of them in labeled bins in the basement, and washing everything from size newborn up to 3 months and filling up the dresser drawers.

And then there's the home-birth center...We originally planned to put a birth tub in the corner of our bedroom but quickly realized that that basement was a better bet. There's more room for the tub, the bathroom is closer, and there's a door that closes in case we need to be sectioned off from the rest of the house. This way, if birthing happens when Hannah is trying to sleep, we don't have to worry about disturbing her. The added benefit is that we can be totally set up and not have all the birth-specific stuff in our living space in the meantime. Check it out! 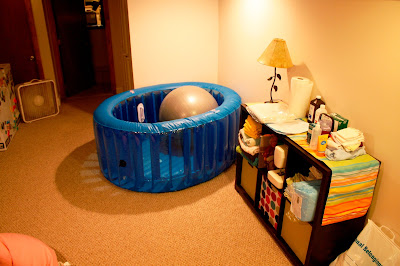 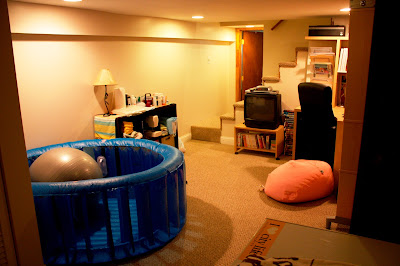 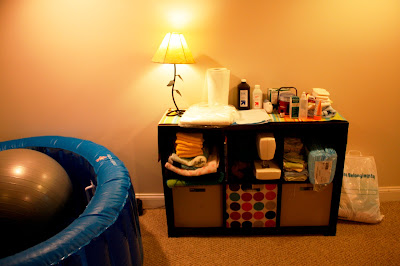 So, yeah, the house is ready to welcome its newest member, and now that he's been cooking in there for more than 37 weeks, he should be getting ready to come on out and check out his new digs.