The transformation of Hannah's art gallery

Hannah's art gallery received mixed reviews while it was up. Some raised their eyebrows, plastered on a smile, and said "Oh wow...how nice" in a tone that indicated the opposite. Some suggested nicer ways of displaying her art, you know, frames and such. Then there were those who, like me, loved the kitschy chaos of it all.

I'm not much of a decorator. I don't feel like spending the time or money required to print photos, buy art, buy frames, coordinate frames, hang stuff...I paint the walls, hang whatever framed stuff I've inherited over the years, and leave the rest of the space blank. It's not that I don't want there to be something there, it's just that I don't have it in me to prioritize it.

When Hannah started school in the fall, she also started coming home with a new painting every day. I followed the Montessori way and made comments like, "tell me about this" and "I see a lot of dark lines in this corner" and "is that an 'H'?" instead of slathering on the praise with a simple, generic "good job!" I wanted to show that I was proud though, that I admire her work and creativity, and also that art is a broad category inclusive of many different styles and artists and she should feel free to consider herself an artist if she so desired, so we started taping her work to the wall. She loved it, and so did I because that long, bleak blank space in the dining room was finally filling with color, and the only effort required of me was a little tape ripping.

As the wall filled up, it became clear that Eric had joined ranks with the first group mentioned above. To some extent, I knew it was getting a little out of hand, especially since a lot of the earlier stuff was ripped and barely hanging on to the wall, but there was still blank space that needed to be filled! Sure, I'll admit it, my slight OCD had started to take over, and I wanted to see just how far we could take it. I had never intended to leave it up forever, and in spite of my last post in which I admitted to being an obsessed parent, the gallery wasn't some sort of shrine in her honor or anything. I never had any intentions of keeping all the paintings (the vast majority went out the with the recycling this morning); I really just thought it was fun. 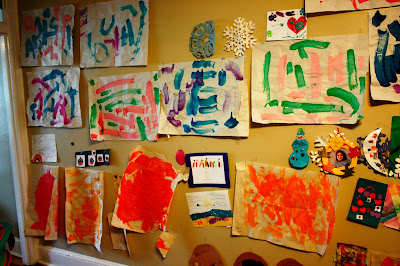 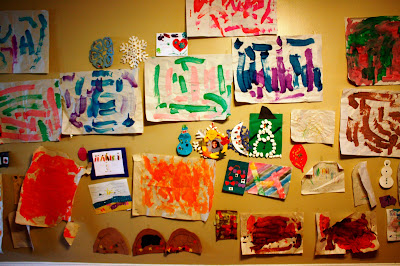 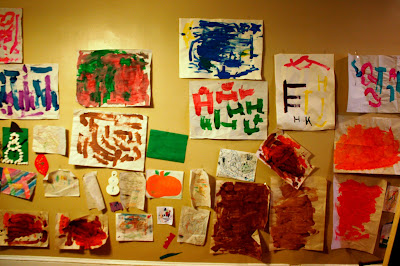 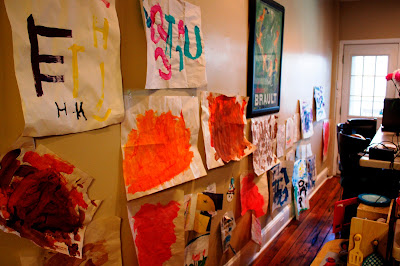 When the only space left on the wall required a ladder to reach, and the piles of new paintings started stacking up on the floor, I took the above pics and agreed it was time for a new decorating scheme. We went to Ikea and picked up five $5 frames. I picked my favorite five paintings, trying to choose one that represented each color phase and also each style phase (she started with blobs of color, then progressed to lines, the letters, then random swirls and lines and blobs combined). I kept a few more favorites too, and I also kept some of the smaller craft projects she did which I don't have frames for yet.

My goal was to create a framed collage on the wall like this or this or any of the ones at this site so that we retained that element of kitschy chaos that I like so much but in a more acceptable manner, but I don't have any idea how to do that. I mean, do you take a methodical approach and measure your wall and then your art and graph it all out using various standard frame sizes and then take that plan to the store to purchase frames? Or do you just buy a random assortment of frames that look good together in various sizes and bring them home and hope you have stuff to fill them? And once you have the frames, how do you decide how to arrange them on the wall? Do you measure then and graph out a game plan or do you just start hammering in nails and hope it looks awesome in the end?

I haven't given up, but I did decide to start small in a manageable way. These frames weigh next to nothing so we used tiny nails and can totally move them around later when we have more frames and a game plan for making the collage thing happen. In the meantime, we went just lined them up horizontally. 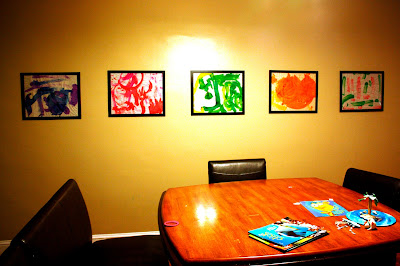 So, artsty fartsy friends, who wants to help me create a Hannah art collage on the dining room wall??? Anybody??
Posted by terri at 8:04 PM

Email ThisBlogThis!Share to TwitterShare to FacebookShare to Pinterest
Labels: art