Bowling with Brandy and a belly shot to boot!

After reading about our annual bowling fiasco, Brandy said she wanted in on some Kellogg family bowling action so we set up a date and, miraculously, made it to Stoneleigh Lanes twice in one year! Our timing was pretty rad because early last week they sent out another Groupon which we promptly scooped up. Who doesn't love half-price shoe rentals, lane rentals, and bowling alley pizza?

We started our morning at the BSO family concert. This one was Musical Roots: From Africa to America and featured an awesome percussion performance by the OrchKids and a few seriously amazing and super fun performances by local beat boxer, Shodekeh. I loved this song best and am thinking I need to order it from iTunes.

We went straight from the concert to the bowling alley (getting ourselves dressed that morning for those two back-to-back activities was a bit of a conundrum) to meet Brandy and Tim, sling some duckpins, and eat some pizza.

For those of you who have been harrassing me because I have posted very few belly shots (ahem, Autumn!) check out this pic in which my super huge belly dwarfs the miniscule little duckpin ball. I'm pretty sure I'd dwarf ten pin ball as well. 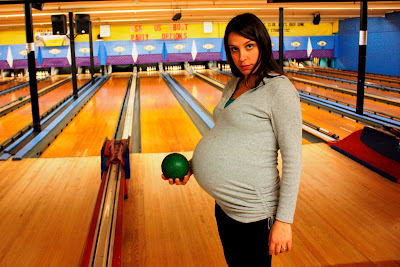 The adult-to-child ratio on this particular bowling fiasco was 4 to 1 which meant that the adults actually played a full game. I don't know the last time I played a whole game...it's been years for sure. Unfortunately, we had no idea how to keep beyond simply marking down the number of pins that we knocked over with each turn so my two spares were ignored. I mention this because I think that should we have been able to calculate in what to do with spares, I might not have come in dead last....

Eric came in at the opposite end of the score card befuddling us native Marylanders and putting us to shame. I grew up lobbing the occasional duckpin with my dad and so did Brandy and Tim, but Eric had never even heard of duckpin until he married me let alone lobbed one down a lane. In spite of being humbled by my Michigander husband, it was a super fun game and a super fun day in general. 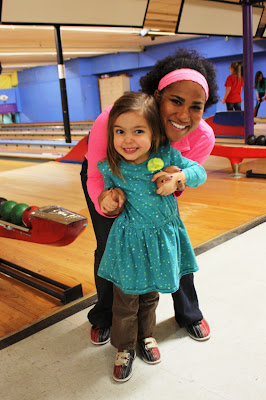 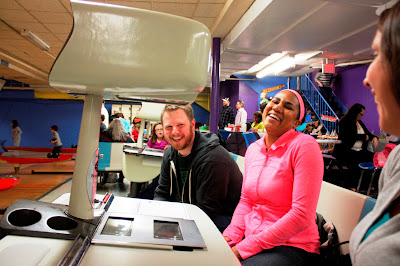 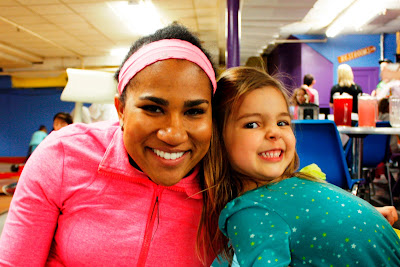 We even ended up with a family picture, courtesy of Brandy! That makes two very rare shots in this one short post. Thanks B!