It seems like in the colder months, there'd be plenty of Saturdays for lobbing duckpin balls down an alley, but the reality is that it ends up happening once a year.

Like last year, a group of us bought the Living Social deal to Stoneleigh Lanes when it came out a few months ago and then coordinated schedules until we came up with a date we could all manage. Sadly, Atticus came down with a fever the day before said Annual Bowling Fiasco and was unable to join us this year. This might mean that we make it more than once since they will undoubtedly want to use their deal...

We met Jess and Todd and Erin, Ryan, Brody, and Addison at the lanes at 11:00 and after shoe-ing up, the kids got down to business. After a few hundred gutter balls, someone had the bright idea to put up the rails. That's all it took for Hannah to start rolling her balls straight down the center. Her and Addy rolled simultaneously down one lane (in spite of numerous adults repeatedly reminding them to wait until one ball hits the pins before rolling another). 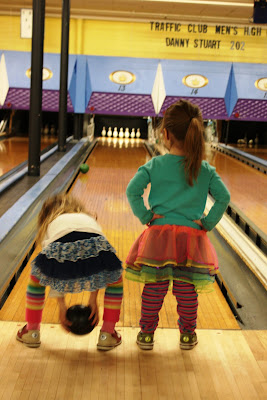 The girls picked up this arms-crossed-while-observing-the-path-of-the-rolled-ball stance. 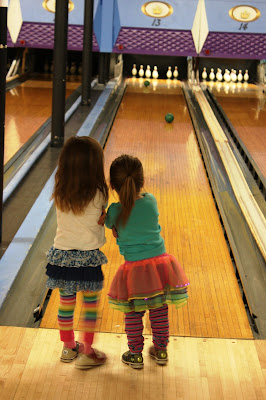 Since the girls stuck primarily to the lane on the left, Brody enjoyed having the next lane over mostly to himself. 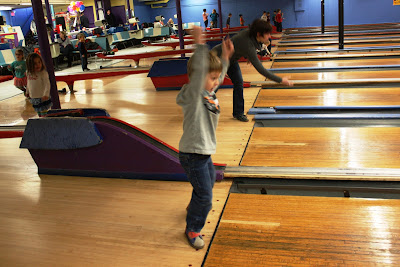 His ball-watching stance was more of a self huddle. 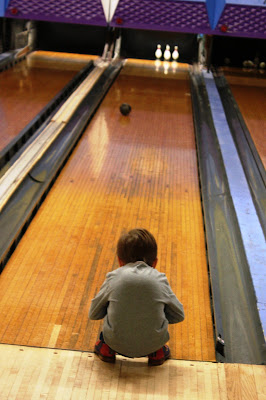 Pizza time for the kids meant the adults got to sneak in a few rolls without pins being unexpectedly reset right at the exact moment that the ball was about to leave the hand. It also meant that the adult-rolled ball made a solo journey to the pins and did not have to share the lane with a wayward kid ball that was lobbed before anyone could yell, "wait!" 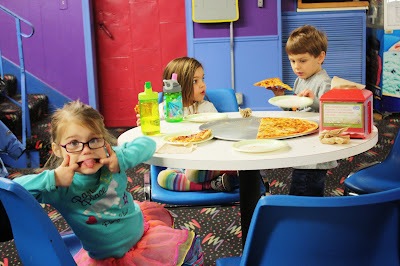 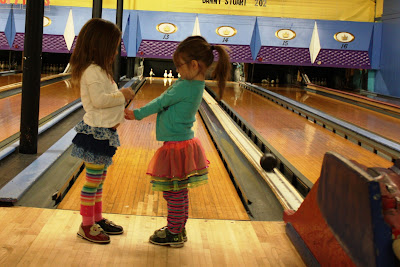 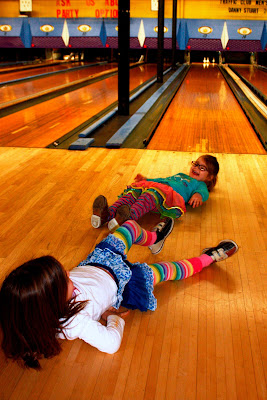 It also inspired snuggle time with daddy-o. Since Hannah was snuggling, Addy wanted in on the action too. This is a thing with them (maybe with all kids???): a few weeks ago at Brody's birthday party, Addy ran up and gave her uncle a huge hug, and as soon as he had put her feet back on the floor, Hannah was jumping into his arms for a snuggle of her own. Yeah, we hang out with them a decent amount, but I'm pretty sure Hannah has exchanged few if any words with Addy's uncle. I find this let's-go-hug-someone bandwagon highly entertaining. It's also really nice, but dwelling on that puts me uncomfortably close to being cheesy so we'll leave it at entertaining. 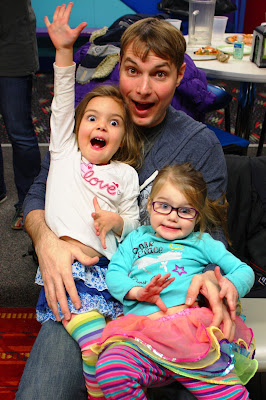 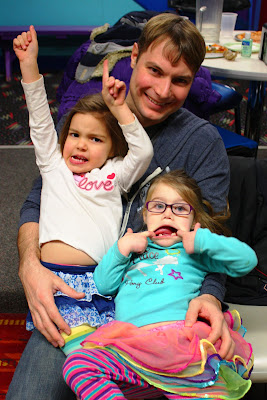 And then our hour was up, and although I thought an hour wouldn't be enough time (pretty sure we were there closer to 2 hours last year), it was actually perfect this year. The kids had lost interest in bowling and had taken to raiding all adult pockets of quarters and dollar bills to pump into the game machines, and the grown-ups were going broke and growing weary trying to keep them wrangled and deny their repeated requests for ice cream and more money.

I snapped my Annual Bowling Fiasco group kid shot and then we suited up and hit the road. 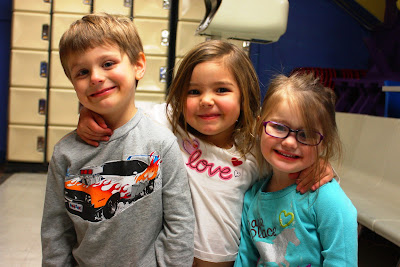 Okay, fine. I also snapped a shot of us girls (women????). I was thinking I would not broadcast this one to the worldwide web because I'm feeling terribly blah-zay and unattractive in it, but Jess and Erin look great so I'm going to suck it up and deal. Anyway, I pride myself on not being one of those people that freaks out about looking bad in a pic and insists that it be erased from existence. And also, I have been terrible about posting belly shots during this pregnancy, so here's an idea of how large and in charge I am if any of you are wondering. 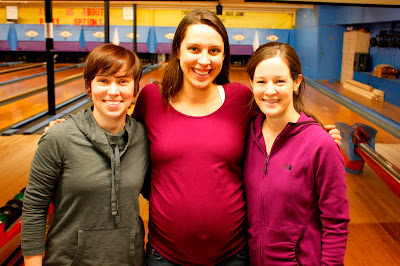