We've been hanging out on the back porch snapping pics today. I took the first one right after painting Hannah's nails Paint Your Earth Eat Your Peace Neon Green. She pulled that bottle of Piggy Paint out of her prize box today after earning 15 stickers. The sticker/reward system has been in flux since that initial post of mine.  After the first week, we abandoned that particular chart in favor of an overall behavior chart that my mom made using Excel (and incorporating clip art to make it easier for Hannah to understand). She still gets a sticker for peeing in the potty (when we remember; the novelty is wearing off), but she puts it on her shirt. The new chart has rows for sleeping through the night in her own bed, brushing her teeth, feeding herself, getting through the day with pee-pee-free pants, and staying in her room during quiet time. After the first 10 stickers, I gave her her first reward (a Fur Real newborn kitty that she picked out at Target). That first prize came up fast so I wasn't prepared for it, but after that I decorated a cardboard box, labeled it "Hannah's Prize Box," and threw a few prizes in there. It's not very well stocked--this is more expensive than I anticipated--but it's got three (now two) bottles of Piggy Paint and some squirter toy from the $1 bins at Target (probably need to find some more things from that area in the future). After the first 10, I upped the sticker count requirement to 15, then 20, then back down to 15. Fortunately Hannah never remembers how many she needs so I can flux it based on how she's doing. She hit a slump this week, and I thought she needed some incentive so I downed it to 15 this afternoon. Also, I really wanted to paint my toes neon green....

So we painted her nails and then came out back to show Daddy and MC and take a pic, the first of which we sent to Laura who cropped it and fixed the coloring. 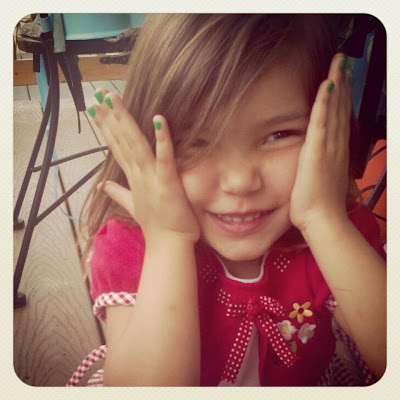 She disappeared inside a few hours later and came back wearing this mask that Laura brought back from her new home in Louisiana, so again, I reached for my phone. It's been a snap-happy day. 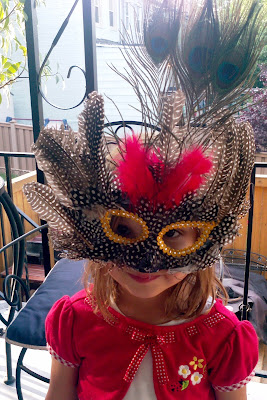 It's also been an incredibly cranky day. This kid woke up on the wrong side of the bed and has been an emotional wreck for the vast majority of the day. We opted to take the path of least resistance in most instances which means Hannah watched a lot of Olivia in the car while we drove around town gathering supplies for our upcoming camping trip. And now it's time to put her back to bed and cross our fingers that she wakes up in a better mood tomorrow....
Posted by terri at 7:12 PM