I'm a week behind with my blogging so instead of catching you up on our super fun birthday weekend, I'm going to take you in the time machine and go all the way back to......last Sunday. Hannah and I headed back to Hagerstown for the second week in a row, but this time to hang out with Grammy who had a special treat for Hannah: tickets to Beauty and the Beast being put on by the local art school at the Maryland Theater. Hannah's first play/musical/theater experience!! And we even got a group photo to remember it by. 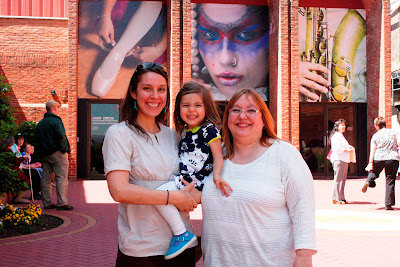 The group photo is courtesy of my cousin Kim. We met the extended fam for lunch at a restaurant across the street from the theater before the show. My camera was acting up, but I still managed to get some cute shots of everyone having QT with Hannah.

We bid them farewell then and went in to find our seats. Mom pulled a little mini Belle doll out of her purse to keep Hannah occupied while we waited for the show to start, and it's a good thing because the show started late, and we were early so we had lots of time to play. 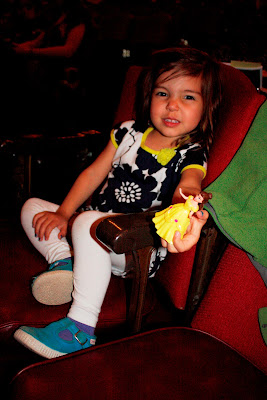 The cast was a pretty talented group of high schoolers with really impressive costumes (especially the Be Our Guest ensemble). We didn't make it past the first act though. I thought that a 2:30 show would be over around 4:30/5:00, but we were hitting intermission at 4:30 and Hannah had gotten up early that day so we hit the road. As it turns out, the meltdown was probably inevitable, and the ride home was bound to be insane regardless of the time. Our portable DVD player is broken, and without that, we were thrown back into the early years of traveling with Hannah in which she spends the vast majority of it screaming as if someone is torturing her. It was really, really, really loud. Painfully loud. It started because we didn't remember to bring the crayons that Grammy had gotten her to go with the coloring book that entertained her during lunch. It escalated from there. I spent the last 20 minutes of the ride holding onto her foot because she insisted I hold her hand, and her foot was all I could reach. It quieted her, so I did it, but holy cow was my arm sore when we made it back to Hampden. Home sweet home. Whew. My brain was fried after that car ride.

Note to self: don't leave the 'hood again until you've purchased a new portable DVD player.