A load in the drawers and a semi-functional sticker chart

You know how Hannah has been potty trained since a few weeks before she turned 2? Well, she's not anymore. When the "accidents" first started a few weeks ago, it was because she was engrossed in playing or, more often, watching TV, and couldn't be bothered with taking a potty break. This seemed relatively normal to me so I didn't worry about it too much, just told her that it was okay, but that she really needed to listen to her body and get to the potty in time. After a few accidents in front of the TV, I gently let her know that we weren't going to be able to keep watching TV if she kept peeing on the couch. (I'm always looking for a reason to not let her watch TV anyway.)

Then it stopped being a matter of being engrossed in something and turned into and all-out, straight-up aversion to using the potty. Example: one morning about 20 minutes after a cup of juice, I asked if she had to pee. She took off running down the hallway screaming "noooooooooo." I didn't push it; I brushed my teeth and and went about getting myself ready. When she came out of her hiding place in my closet a few minutes later, her pants were soaked. She obviously had to pee. She was not in the middle of an activity. She was reminded to pee. She refused. What's the deal with that??

Later that day she peed on the booth seats we have at our table while eating lunch. Just hauled off and peed. We were talking and hanging out and eating, and I heard a water-like sound and looked over in time to see a puddle spreading out around her.

When the accidents first started happening, we were calm and gentle and careful not to be negative.  When the accidents got more intentional, calm turned to flabbergasted, and it showed in our reactions. We were both guilty of exclaiming, "Hannah! What are you doing? Why did you pee in your pants?" As soon as I heard it come out of Eric's mouth I realized how negative and accusatory it sounded and decided we needed to curb that and opt for some positive reinforcement. Enter the sticker chart.

Hannah's friend, Kylie, has a sticker chart and gets stickers for getting herself ready in the morning. Since Hannah LOVES stickers, and since toddlers across the country seem to be trained by these seemingly easy contraptions, I decided to give it a go. I got out some construction paper and created this less-than-artistic-but-totally-functional chart, then I called my mom to ask if she knew where I could find a sweet selection of stickers. She said she was heading to Target that night and would look there and report back. In the interim, I dug out the stickers left over from the egg dying kit Shannon brought over. 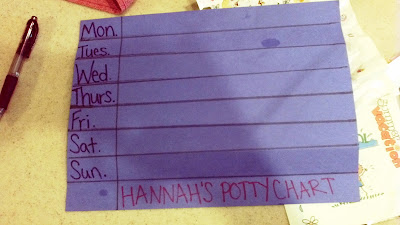 Our first day went pretty well. I decided that Hannah could have a little sticker every time she peed in the potty, and at the end of the day, if her pants were still dry, she could have a big sticker. She made it until dinner time with dry pants. No big sticker, but not a bad day.

The next day, sticker reinforcement arrived via USPS. Grammy had found a huge arsenal of stickers at Target and instead of just reporting back, she bought them. All of them I think. 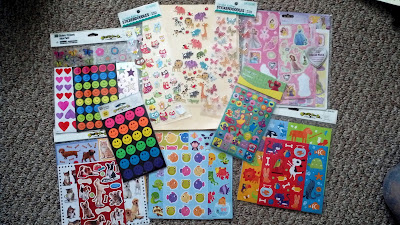 Within the arsenal of stickers is a highly coveted pack of princess stickers. These became the new end-of-day prize. So far, she has received one princess sticker, and really, I cheated that day. She did pee in her pants, but it was first thing in the morning and during an INSANE temper tantrum. I decided to "forget" about that at the end of the day because it was the only day she didn't pee right around dinner time, and I figured she forgot about it too, and I wanted to give her a little incentive, so she she got a princess sticker that day.

The chart mostly worked for most of the week (except for the daily evening accident), then this morning she peed in her bear cave (a fort her and Eric made out of couch cushions and blankets), and then during quiet time she dropped a giant load in her pants. That's the first time she's pooped in her pants in a really, really, really long time, and it was really, really, really uncool. We put her in a diaper after that, and she's still in it now.

When we ask her what's going on and why she's peeing in her pants, she just says she doesn't feel like going to the potty.  I called the doctor about it at the beginning of last week and they suggested I bring her in and have them run a quick UTI test, just to rule that out, but that based on what I'm saying, it doesn't sound like that's an issue. Since the sticker chart was working until today, I didn't prioritize the doctor visit, but I suppose I should. 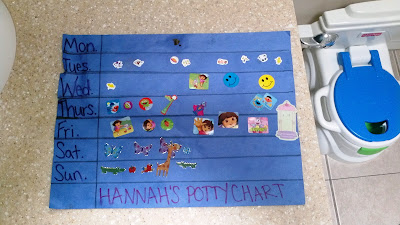 From what I'm reading online, a potty-training regression is pretty normal, but this one just seems crazy. Has anybody experienced one this HUGE?? Any advice? How long will this last? I don't want to go back to diapers!! I'm trying to stay positive with her, but it's really getting frustrating. Of all the times that we have regressed into a behavior that I thought we had moved beyond (sleeping, tantrums, whatever), this has got to be the worst.
Posted by terri at 4:29 PM