Climbing trees at Sherwood Gardens and other nature tales

For not having any kind of a yard, we managed to spend a great deal of last weekend communing with nature. On Saturday we met Brody and Addison (and parents) at Sherwood Gardens to climb trees, run around on the soft, green grass, and not traipse through the pretty tulip patches. There were a few casualties (two of which are in a vase on the table), but most of the tulips were still standing when we left. The kids were far more interested in tree-climbing than tulip-picking anyway. 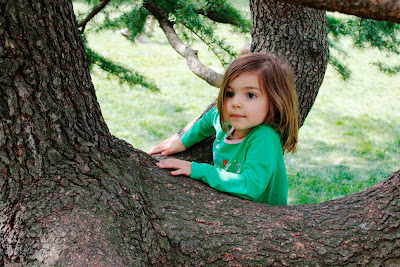 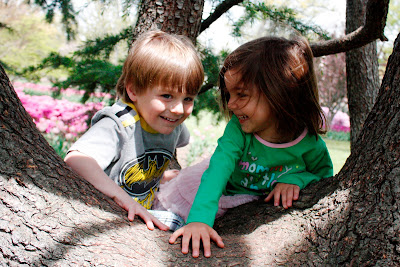 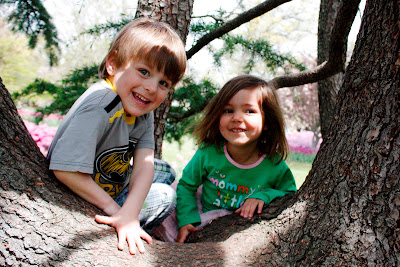 Addison is a big fan of Hannah's binoculars (a free gift with her subscription to Wild Animal Baby, courtesy of Grammy). She practiced looking cute while strolling in circles around the tree while Brody and Hannah engaged in some pretty aggressive tackle football that had the grown-ups cracking up. Unfortunately, I didn't get a pic of Hannah taking Brody down, which she did repeatedly, much to Brody's delight. 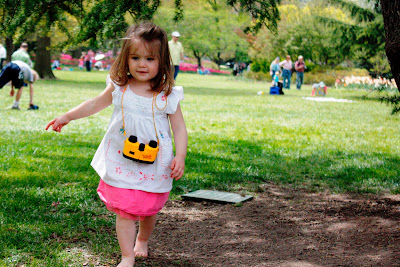 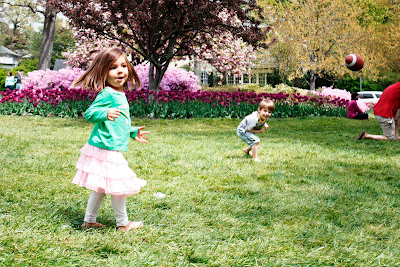 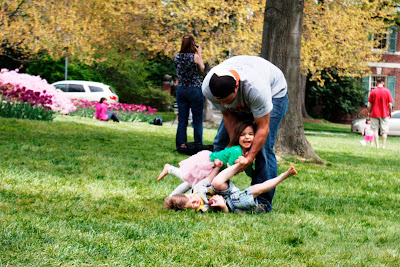 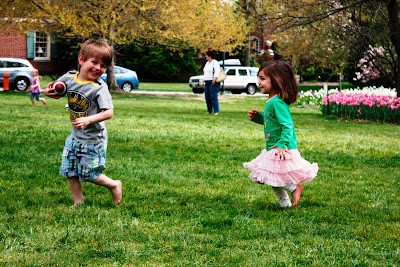 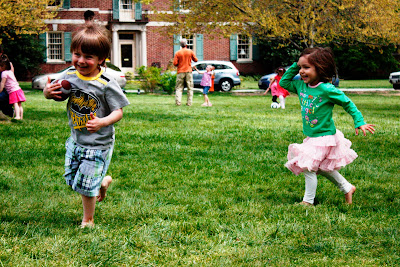 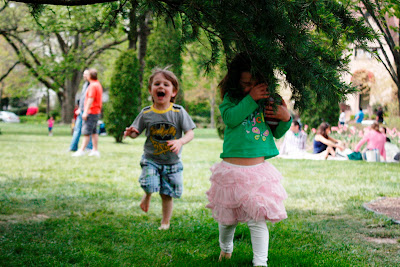 At some point, one of them spotted a "trail." Really, one of them just got smart and decided to dub the mulch a "trail" in a successful effort to gain permission to traipse through it. They're smart little buggers. Within the trail was a young girl (maybe 10?) perched on a tree with her journal. Hannah and Addison were obsessed. They stood there and stared at the girl for eons while Erin and I tried to coax them away. They asked a few questions too, like "what are you doing?" and "why aren't you wearing pants?" (She was wearing short white shorts which I guess confused the questioner.) 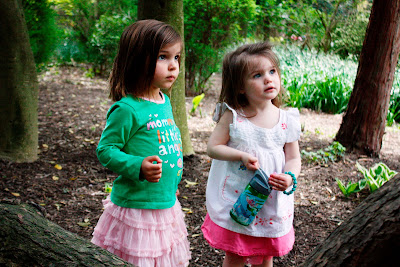 Quiet time was a wash that day--we were at the gardens until after 2:00. Time flies! As a result, when we packed up and picked her up to go, over-exhaustion kicked in and she screamed bloody murder from one end of the park to the other as we made our way back to the car. She finally calmed down a few feet from the street where we'd parked, and Brody summed it up for all of us when he said something along the lines of, "I had enough of Hannah crying," in his very cute voice.

We spent most of the rest of that day crashed out on the couch, but then the next day, after a morning at the farmer's market and planting flowers, we drove out to to the Ellicott City area to visit Jess and Todd. I'm really bummed that I didn't take my camera with me there because if I had been going mamarazzi, I'd have a picture of Eric holding up a crayfish, a salamander, and a frog for Hannah to investigate. Awesome, right?? Their house backs up to Patapsco State Park, so we hopped on the access trail from their backyard and followed it down to the train tracks and the river on the other side. On the way down, Eric found a stream off the trail that was teaming with life--a crayfish and salamander were in hand within a span of a few minutes. The frog they found at the river, and Hannah got to hold that one, at least until he hopped out of her hands and swam away. They also found a snake curled up on the bottom of the river, but they left him where he was.  It was a seriously awesome visit: not only did we get to hang out with two of our favorite friends, but we got to do so outside in a beautiful park on a super gorgeous day. And then they fed us dinner with some delicious vegan carrot cake muffins for dessert. How lucky are we!!!

We all smiled ourselves to sleep on Sunday night, taking turns exclaiming what a great weekend it was.