There have been a few days in the last two weeks when Hannah has refused to nap.  I blame it on myself because for a while there she was falling asleep by about 1:00 so I started to think, "oh, nap time at 1:00 instead of 12:30," and instead of taking her upstairs at noon to start winding down (which is what time I take her up if I want her asleep by 1:00), I started taking her up at 12:45.  It rarely takes her less than an hour to wind down and pass out, so why I bumped nap time back is beyond me and even more baffling is why I keep repeating this mistake in spite of the obvious outcome. ...Actually, I do know why I keep repeating it. It's because she's actually started eating, but only if you follow her around with a spoon while she keeps busy doing more important things, like making her Boots paper doll tell her Dora paper doll to put on her sunglasses.  If I follow her around, she will actually eat everything on her plate, but it takes no less than an hour.  So an extended lunch time is partly to blame for missing Hannah's nap time window.

This whole following-her-around-with-a-spoon thing has got to end. I know it.  I've told Eric that although I have no regrets about making Hannah the center of our universe, if there is ever to be another child, we need to coax her off to one side of the universe at least a little bit. She is a super fun kid to parent, but holy cow is she exhausting!!  Sometimes I wonder how(if??) I'll be able to add another kid into the mix without losing my mind, especially if child number two ends up being as spirited as child number one.

As usual, I've digressed. My original intent with this post was to tell you a story I've titled: The Ultimate Imitator. Today I laid Hannah in her crib at 12:50 and sat down in a chair by at the end of her crib for 20 minutes (I've been trying to restart a bit of the ol' Sleep Lady shuffle in an effort to coax her off to one side of the universe), but I hadn't eaten lunch yet so after 20 minutes of watching her lay on her back staring up at the ceiling, I left her to her own devices and went to raid the refrigerator. She was bolt upright in bed in bed  playing with her dollhouse dolls--which, for some stupid reason, I let her take to bed with her--before I was even down the stairs.  She walks them along the back of the crib and then drops them down between the wall and the crib. Before long, all had plummeted to the floor, and Hannah was at the foot of the bed yelling, "Mommmmmy. Dropped daddy.  Dropped baby.  Mommmmmy. Help."

I went up but only because I figured she'd pooped anyway and needed to be changed. For whatever reason, Hannah will poop within about 20 minutes of being placed in her crib for nap time.  She poops in the potty the rest of the day, but she saves that after lunch poop for nap time.  It's about the only predictable thing she does. So I went up, changed her predictably poop diaper, picked up the little dolls, and put Hannah and dolls back in crib.  She resumed playing, and I resumed my spot on the couch watching the monitor while looking up recipes in an attempt to plan dinner.

It wasn't long before she had dropped all the dolls again and again started yelling for me.  I ignored her for a while but then she dropped lovey, so I went up and returned lovey and blankie only and then came right back downstairs.  She screamed for a minute and then decided to use her words: "Nap time. Over.  Nap time. Over mommy.  Mom. Mommy.  Mommmmmmy. Mom.  Right now mommy.  Right now. Up. Up.  Waaahhhhn [One].  Twooooo. Free.  Right now mommy.  Waaaaahhhhn.  Twoooooo. Free."

It's very humbling to realize you're being imitated, and it's also kind of enlightening since you often don't realize certain things about yourself until they're imitated.  So, yep. I often say, "Right now Hannah" when she's lollygagging around.  And when I want her to do something, say, lay down so I can put on her diaper and pajamas, I say "Hannah, I'm going to count to three. You can either come lay down by yourself, or I can come and get you and lay you down.  Wahhhhhn.  Twoooooo. Last chance to lay down by yourself.  Three.  Okay, I'm going to come get you."  She almost always does the thing I'm asking her to do at "thr..."

I talked to her through the intercom in the monitor telling her that nap time was not over, and that'd I'd be up in 20 minutes, exactly 2 hours after laying her down.  I'm desperate for one of those toddler alarm clocks to help convey the message of when she should be sleeping and when it's okay to wake up, but we spent so much money on the bunk beds and mattresses for her room that we're still paying for some of July's expenses and have no room for $40 clocks that may or may not work with Hannah.

So I turn off the volume on the monitor for the next 20 minutes to keep from losing my mind, and I watch the clock.  At 2:40, I drudge into her room and open the blinds.  After standing her on the floor, she continues her imitating by pointing at the crib and telling me to "Lay down. Close eyes."  That's a command you don't have to tell me twice! Unlike my daughter, sleeping is one of my favorite activities and there are few things I'd rather do. I crawled into her crib, curled up, and closed my eyes. She grabbed a library book and sat on the chair that I was sitting on earlier at the beginning of her nap and began reading aloud to me.  This is the kind of role reversal I can get behind.

This is what I mean when I say that she is both frustrating and totally fun.

If you made it all the way through that spiel, please accept these totally unrelated photos from yesterday as a reward for your efforts.

Yesterday morning we decided to tempt the gods of luck by playing with an open umbrella indoors during breakfast. It made a pretty fun tent-like structure. 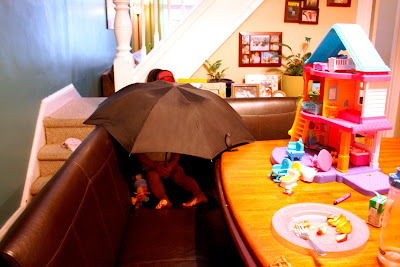 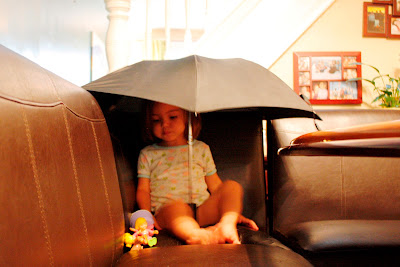 After breakfast we put on our raincoats and took the umbrella outside with the intent of singing in the rain and jumping in some puddles, but that's when Shannon and Atticus pulled up so we happily went back inside to play.  Hannah helped me babysit Atticus all day yesterday, and with the exception of nap time (during which both children screamed simultaneously for over an hour forcing me to run back and forth between the bedrooms every 10 minutes), she was quite helpful.

Somehow, Atticus didn't discover Hannah's birthday balloons until the end of the day when his daddy came to get him. The kiddos spent a good 15 minutes swatting those things around and giggling like crazy. 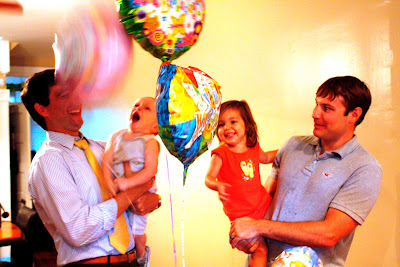 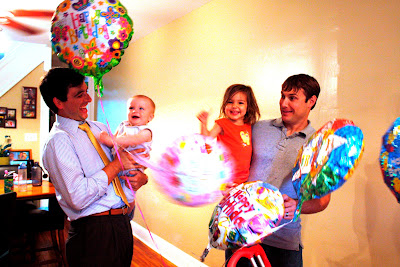 Whew. That was a lot of writing. I'm spent so you'll have to write your own conclusion on this one.