Hannah trikes around by herself

Eric had to run 16 miles this morning, and since we had nothing else to do, we decided to bike along beside him and be his pit crew.  His plan was to do two 8-mile loops over to Druid Hill Park and then back, and our plan was to just do one lap.  Hannah needed a break once we made it to the reservoir though so we pulled over at the far end where you can see a view of a bunch of on-ramps to 83 and the city in the background and stretched our legs, drank some water, and ate a snack while Eric ran a few laps around the reservoir.  Those laps upped his first loop to 11 miles so that when we made it back to the house, he just had to rehydrate and head back out for a short 5 miler.

Hannah liked watching daddy run, and I guess she really liked being on the bike too because she had me remove the protective waist band thingy from her trike so she could get on and off independently.  After her nap we took her and her trike over to the parking lot behind The Rotunda to give her a chance to practice pedaling by herself.  Now, just to be truthful, that parking lot has a slight but definite slope which helped her pedaling efforts pretty significantly, but still!  We were impressed none-the-less with her first independent trike ride!! 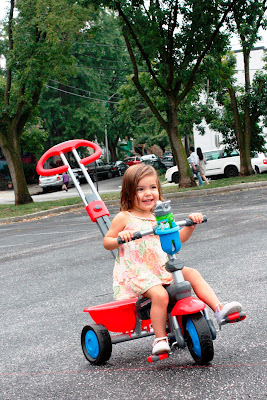 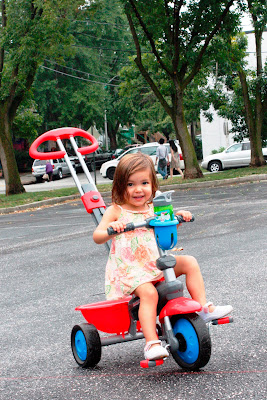 As a disclaimer, we had a terrible time editing this video...While filming Eric cut her head off for the last 30 seconds or so.  We tried to cut that but the editing software really blows so...when you get to the part where her head is cut off, you should probably stop watching...Also, for some reason I can't get it to embed so you'll have to just click the link.