Tired, but wanted to post a few not-so-good pics before we shove off to Michigan. Hannah and I finally made it to Ultimate Playzone on Thursday morning and loved it!  It helped that Brody and Addison were there for Hannah to play with, especially Brody since Hannah trusts him and loves following him around.  I was hoping to get some good pics of the three of them bouncing around on all the crazy inflatables, but getting them all together for longer than a split second was totally impossible--they're way too fast for me to keep up with.

This one is verging on inappropriate buttttt.... 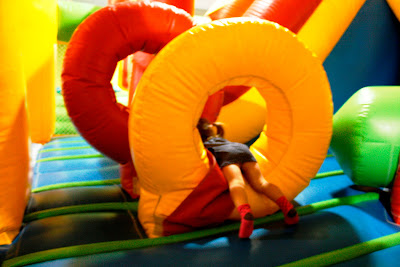 I almost had a pic of all three of them on this thing but then Brody took off with Addison close behind, and here's Hannah taking off after them. 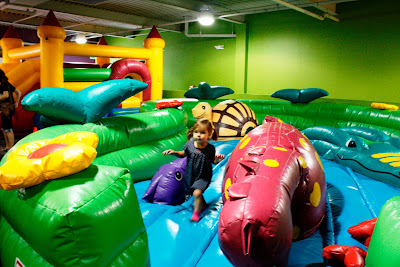 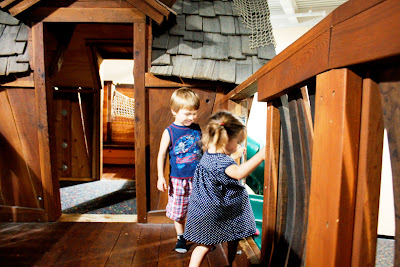 This is definitely someplace I can see us frequenting pretty often. Who doesn't love a giant space full of various inflatables, a giant play house with slide, and a pirate ship with two slidess???  Plus it's cheap--$7 total.  Adults are free with one paying kid.  And the best part: adults can play too.  Toward the end Hannah got bored in the little play house where Brody and Addison were content to keep playing so the two of us hit up the maze inflatable, and by the end of the morning, I was sweaty and ready for a nap.  I heart inflatables.
Posted by terri at 9:32 PM