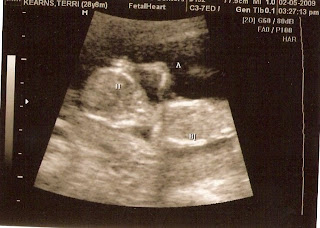 Thursday was the 12 week midwife appointment. The nurse showed me the routine I was to follow in the future: enter the exam room which is purposely left open, pee in a cup, dip a color stick in my pee and read it (yep, I'm responsible for that now), weigh myself, and then wait for the midwife who will then listen to the baby's heartbeat and answer any questions.

She also gave me some paperwork to sign, one of which has to do with the tub. Apparently it is routine for them to use a tub in childbirth. Interesting, huh? For most places (hospitals) it's def not the norm and probably costs a ton of money and is definitely not covered by insurance. But here, there's a tub in every delivery room and they almost always use it. I would assume that since it's part of the routine it's covered by insurance but I gotta call and check. Anyway, I think that's a pretty fun option to have. I haven't done much research on it yet, but I certainly like having options.

I have more sonograms because I volunteered for the down syndrome test they do at 12 weeks. There are a couple doctors at the Woman Care Center who are not yet certified to use the sonogram to determine whether or not the baby will have downs (they do this by taking a picture and measuring the baby's neck fat). This particular fetus that I'm carrying around refused to get into the required certification position (already a rebel!!). The nurse performing the sono 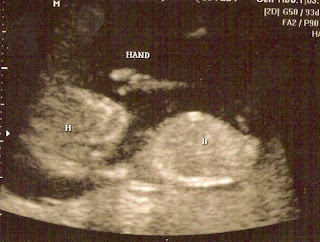 gram said she can tell by looking that the neck fat is normal and fine so we should be good. The good news to the baby being a reble is that I got to watch the baby moving around on the screen for a good 15 minutes while the very persisten nurse jabbed at my stomach with the sonogram tool in an attempt to coerce the baby into the needed position. The jabbing wasn't fun, but watching the baby on the screen was really cool. It floated around like a jelly fish waving its arms and bouncing off the walls. It was much cooler than the last sonogram because it actually looks like a baby now (though a baby with both alien and prehistoric tendencies). The first time I had trouble believing that the splotch they kept pointing to was anything more than a renegade rotisserie chicken floating free from the digestive tract.

I asked if she could tell the gender yet. Apparently at 12 weeks the fetus still has a bit of a tail bone so gender-telling is not a shoo in, but she's thinking that the thing between this fetus' legs is the remnants of a tail bone and that a "hoo-hah" (I swear she called it that) was developing. For those of you who don't speak dr. Suess, she's guessing that it's a girl. Wahooo!! Of course I'm happy either way, but I was kinda hoping for a girl. We'll know for sure at the 20 week songoram (April).

I know this was a more boring post, but after the adventure last week, I'm pretty relieved to have nothing crazy to say!
Posted by terri at 4:57 PM