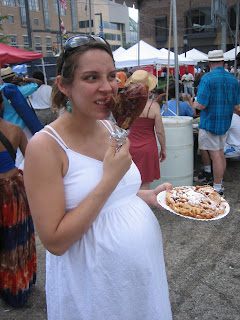 Here's me feasting on some delicious festival food at Artscape. Mmmmm...turkey legs and funnel cakes! This was preceded by a falafel wrap and followed up with some vegan sweet potato pie ice cream. I just love festival food!
The whole walking around thing got real old real fast though. By about hour 2 my feet were aching and throbbing. About a half hour later my lower back spoke up (a cry against my very old flip-flops and my insistance on walking around on them all day). We sat down for a while, but then when I stood up again, I discovered that my hips had followed behind my legs and feet. I hobbled around like an old lady...or an invalid. I hate feeling so incapable! I was so desperate to lay on my couch that I started calling friends with the intent of begging them to pick me up and take me home. Nobody answered. Fortunately, Eric and 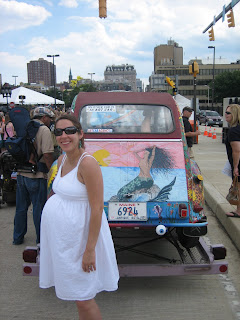 his mom were okay with leaving; I felt bad dragging them away though.
The big kicker though was walking from the lightrail up all those hills back to our house....Amy called back just then and saved the day by picking us up. I've never been so grateful for a ride!! You would not believe how much I was hobbling...insane.
I did, however, discover another use for the belly: as a cupholder. 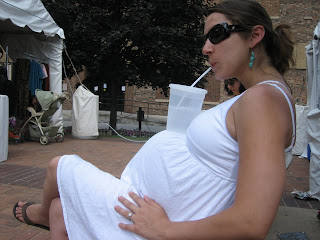 P.S. The next post will cover the baby shower and how fun and awesome it was!! I just need to get the photos from Laura first....
.
Posted by terri at 8:09 PM