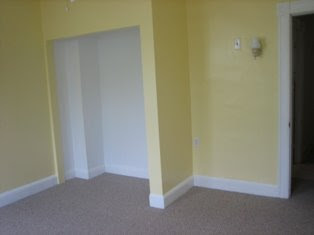 The nursery was pretty low on the priority list for home renovations, but we somehow managed to finish it right along with the basement (which was started back in March). I figure since she sleeps in our room for the first couple months anyway, there's no rush to finish her room. However, the method to our madness of renovation pushed that up a bit. We needed to get carpet down in the basement prior to the moving truck that shows up tomorrow. Since I also wanted to re-carpet that back bedroom (aka the nursery), we decided to have both areas carpeted in the same trip to save money. Once that was decided, we realized we 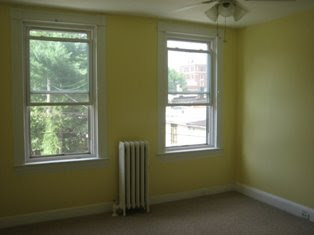 better get some drywall on that closet that Eric had already framed out (the previous closet didn't leave room for hangers so we had to build a new one--I should probably stop saying "we"....). And of course it also made sense to paint the walls prior to the carpeters, so voila! A finished room!

The color I chose is called Wickerware. I was going for something with more of an earth tone and not too pastel or babyish, but I also didn't want something too grown-up-ish. I think I struck a good balance thanks to input from both my mom and Shannon (both picked that color first out of the many swatches I picked out). Since we've been sleeping in there since the carpet guys packed up and left (moved everything out of our room and into the nursery Thursday night), I can say from experience that is a really nice, really peaceful room. I'm liking waking up there so I think Hannah will too!

I'll take more pics once we actually get it set up like a nursery, in the meantime, it's our temporary bedroom.
Posted by terri at 1:40 PM