I was tested again today for Group B Strep (see MUCH earlier blog post, like sometime in December). I don't have the results yet, but I'm not too hopeful. The midwife said that the first time I tested positive in my urine rather than during a pap smear which means it's likely that this bacteria really is a natural part of my flora and not just something that comes and goes like it does in many women. So it's looking like I'm going to have to get the antibiotic :( I was pretty bummed and almost cried for a minute (dang hormones!), but I pulled it together. Eric came with me today and having him there helped out. Now that he's living here and just working on the house (as opposed to working at his job, working on the house in VA Beach, working on this house, and commuting 5 hours up here every weekend), I've asked him to take a bigger role in my prenatal care and helping me prepare for the birth. Hopefully he'll be able to come to my appointments from here on out and will get to meet each of the three midwives at least once prior to the birth.

Who knows how many more appointments we'll have though...after testing for GBS, the midwife performed an exam and discovered that I am currently dilated 2 centimeters. I freaked out and asked if that meant Hannah was going to come early. She said "no, it could still be 3 or 4 weeks. You're just getting an early start." Ummmmm.....3 weeks still seems early. I was thinking I had 5 or more. After all, most first babies are late, right? So I was thinking end of August...not beginning of August. Not a fan of this lack of control I have over mother nature and my unborn child.

The midwife also said that the baby has dropped into the -2 station. Here's an explanation of what that means from a random website:

It "involves the actual exit of the baby through the mother's pelvis...This reference, called "station," is used to document on the record how far down the head of the baby has descended toward delivery...The station is based on how far down the head has dropped in relation to two bony prominences (called the ischial spines) that mark the midpelvis (halfway out). When an exam is done, the position of the "presenting part," i.e., that part of the baby (hopefully, the top of the head) that will be the first to deliver is felt as compared to the ischial spines. If the very top of the head is at the ischial spines, it's called a zero station. And for every centimeter distance from the spines, either above or below, the presenting part can be said to be anywhere between -3 and +3. "-3" is 3 cm. above the ischial spines. +3 is 3 cm below the ischial spines, and, well, you better call the doctor, because that baby's about to be delivered! True, a +3 station shows the baby's scalp on the perineum (at the opening of the vagina)."

I uploaded a picture I downloaded from a different website. (Am I allowed to do that? Copyright laws....??? You can access the link to the website I borrowed this from by clicking the word "picture" above so I should be okay since I referenced my source, right? You should probably just click the link anyway because it's way easier to see than this tiny illustration.) FYI, the baby in the illustration is at the -2 station, but that baby is 41 we 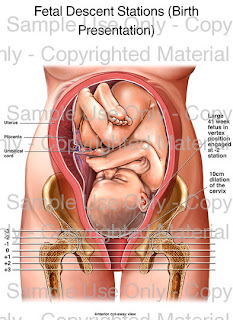 The midwife also "guessed" at the baby's weight. No science involved here, she just felt around and based on the size, she thinks Hannah weighs 6 pounds. According to the book, she should be about 6 pounds this time next week. No biggie, but we might have a baby a little earlier than we anticipated...Fingers crossed that she doesn't come before the 10th. I need at least that first week in August to wash all the baby clothes and get the nursery set up. For now I need to clean and motivate to the grocery store. So much to do, so little time to do it.
Posted by terri at 5:52 PM