Aargh!! All hands on deck!

Baltimore's Urban Pirates family adventure cruise rocks. Seriously. We had so much fun! Granted, I did not have terribly high expectations, I mean, I LOVE kitschy activities more than the average Joe, but I also recognize that a great deal of said activities are often only moderately entertaining at best (thinking specifically of Frontier Town which totally sucked and was obviously being enacted by people who hate their jobs). Not so with this one. Urban Pirates FAR exceeded my expectations. The crew was full of fun activities, and they had amazingly silly attitudes.

Hannah brought her own pirate hat and sword, but her and Addison happily accepted a marker mustache and beard and mermaid fake tattoos. 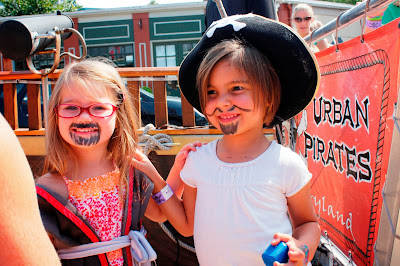 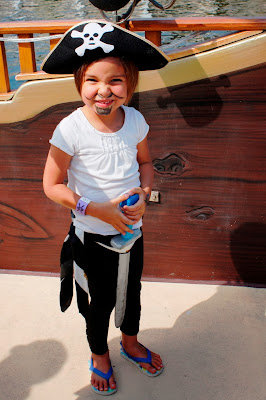 The crew kept the kids going non-stop with fun, silly activities, starting with learning some pirate lingo (e.g., all hands on deck, which was translated literally, and avast, which means freeze). There were a few different dance parties, one of which taught me some sweet new moves (e.g., swab the deck, raise the sails). 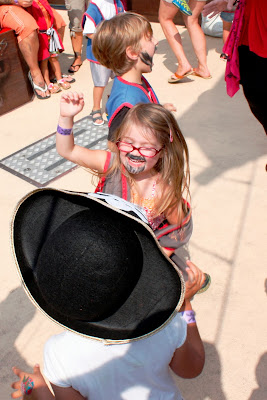 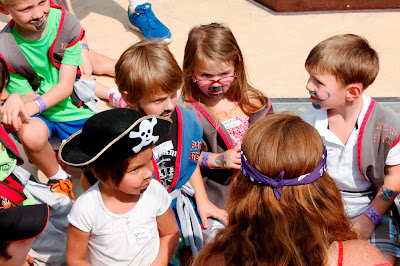 In the beginning, I was part of what they called "the shade brigade." (Love it! Totally stealing that term, along with "check yourself before you shipwreck yourself." There were more that I fully intended to incorporate into my daily speech, but I forget them now.) 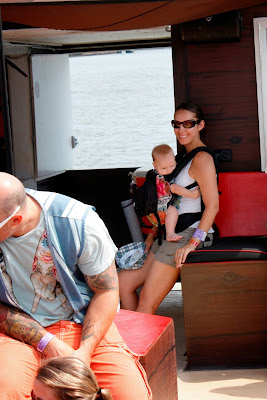 The ship sails around the harbor for an hour, and at the far end near the Science Center, the kids got to spray the water canons at strolling tourists who paused to smile at the spectacle and take pictures (we didn't get close enough to actually get them wet). 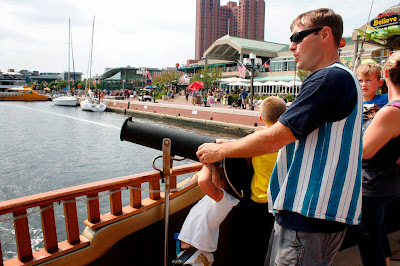 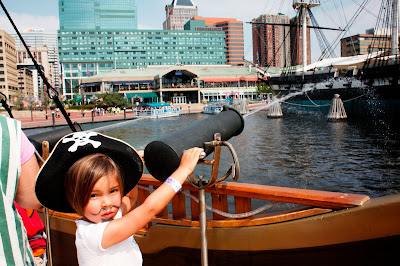 No pirate sail is complete without a conga line followed by a game of limbo. 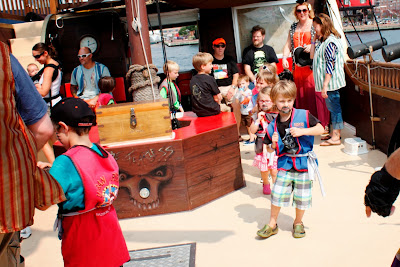 I disbanded the shade brigade to conga with Hannah. 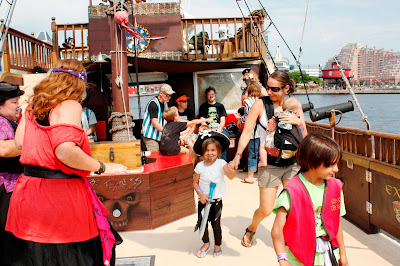 At various points throughout our ride, Madman Mike, the rogue pirate who stole the treasure, would appear in his little dingy and circle the ship fake menacingly. When that happened, the water canons were turned back on and the kids tried to soak him. 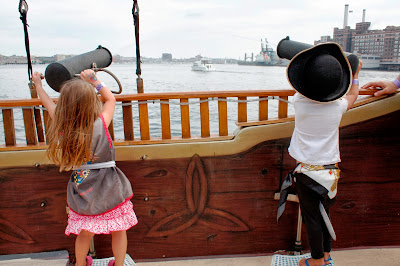 Toward the end, at the insistence of the crew to return the treasure, Madman Mike offered to trade it for Hannah's sweet hat, but she said no way. The crew huddled the children together to come up with a plan: trick Madman Mike! They let him think they were going to give him the hat, so he handed over the treasure, but Hannah held onto her hat.

Before debarking the ship, the kids got to pick two things from the treasure box. Hannah picked over the little plastic toys and grabbed two gold doubloons. (She's recently acquired an obsession with Jake and the Neverland Pirates, and they're always collecting and counting gold doubloons...)

I wore my psi bands to keep the motion sickness at bay, and they worked pretty well, and I was only slightly uncomfortable. 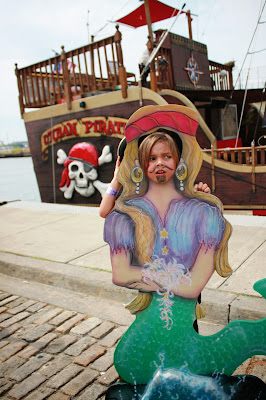 Bottom line: if you haven't been, you should totally go. We had a Groupon which sweetened the deal (I think full price is $20/ticket for everyone over age 3), but now that I know how fun it is, I'd pay full price (unless, of course, they run another Groupon deal, in which case, I'll happily take the deal). This is definitely something we'll do again!
Posted by terri at 10:53 PM