I forcibly peeled myself from Orange is the New Black tonight which Eric and I have been watching obsessively for the last week so I can finish this post which I started right before I got sucked into the awesomeness of ONB (an acronym that Eric made up and is desperately trying to make stick, but so far it's not quite working).

We planned this year's vacation all the way back in February when Jacob was still in utero. I knew that if I didn't have something locked down, I'd probably chicken out of traveling with a baby and we'd end up going nowhere. Priorities this year were to keep it close and cheap. We weren't sure how he'd do in the car at that time so close was necessary for our nerves, and our constant quest for a house with a yard has us pinching pennies. Ocean City met that criteria! I was hoping to find something in Bethany or one of the quieter Delaware beaches, but for $100/night, we ended up with a really nice condo on 5th Street bay side. I was dubious about staying right in the middle of everything with two kids, and to be honest, I don't think we'll do it again, but the place was really nice and the owners were incredibly thoughtful and helpful so who knows.

Eric took off the week before vacation and by Wednesday we were itching to get out of town so we called the FSK Family resort and booked a room for Thursday and Friday night. Let the record show that this trip was the most kitschy vacation ever. We did all the quintessential Ocean City stuff. It was fun, but we don't intend to do it anything like this in future years. The resort had an indoor pool and an outdoor pirate ship sprayground (made that word up; it works through, right?) that kept Hannah thoroughly entertained.

We drove to Assateague on Friday and spent the day soaking up the rays and saturating ourselves in sand. 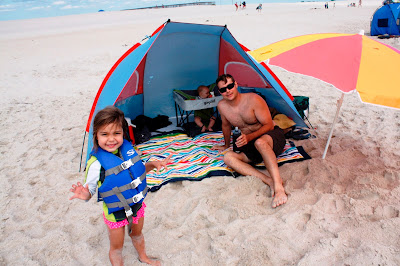 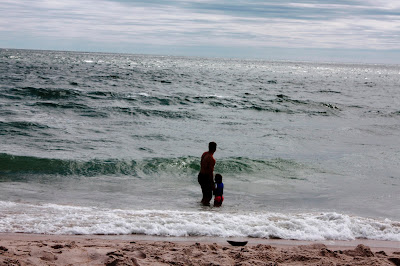 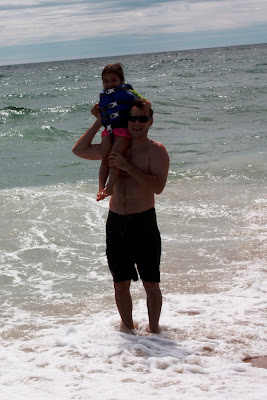 Jacob refused to nap on the blanket so when exhaustion turned him into a cranky bear I tucked him into the baby carrier and walked the beach while he slept. I also trekked back to the car to get Eric's boogie board, and he insisted on taking a picture of me when I returned. Alas, I am not not that cool. I did not ride that boogie board. I didn't even get in to the ocean past my knees...but I would have if it weren't so cold!!! I'm not 10 on the fun scale, but I'm not a total stick in the mud, not unless it's cold anyway. No fun is ever worth me being cold for. 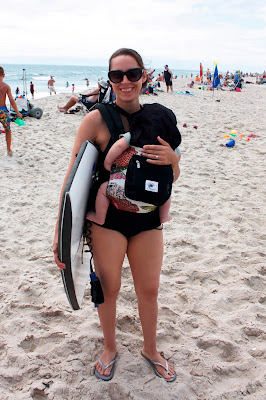 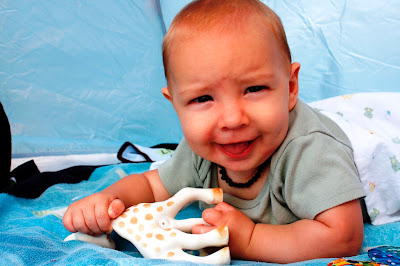 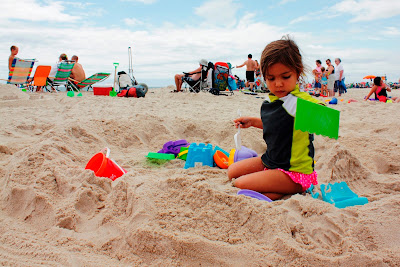 Jacob LOVED the sand. I sat him down in it and Hannah buried his feet while he wiggled his toes and grabbed handfuls of it, all the while looking seriously perplexed. A few days later he ended up eating quite a bit of it in spite of me watching him like a hawk. I don't know how much he ate, but it was coming out in his diapers, and he spent much of that night crying as it worked its way through his digestive system. 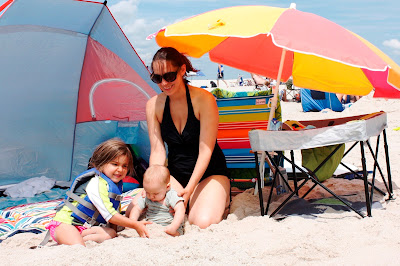 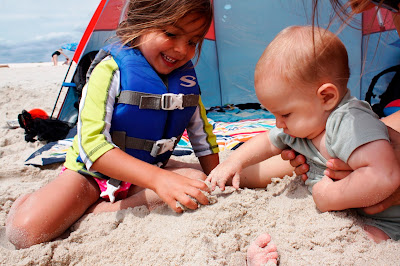 When I was growing up we went to Ocean City pretty much every year. My mom had to save all year long to make it happen, but she managed. We'd stay in a motel with a mini fridge so we could keep orange juice and lunch meat cool. We spent all day every day at the beach, eating breakfast and lunch from our cooler. We didn't need anything else, but this one time there was a little extra money for whatever reason so we went to Frontier Town. I have memories of having my face shaved with a pretend straight razor in an old-fashioned saloon, riding a pony (the only time I rode a horse until I was an adult), and watching some Native American dancing. They're nice memories, so on Saturday, after checking out of the hotel and before checking into our condo, we took Hannah to Frontier Town.

This turned out to be a not-so-great idea. It's the pretend wild west and in the pretend wild west there are pretend gun fights. We sat down to watch a show, and my jaw dropped as one actor stumbled out with a bottle feigning drunkeness and then started firing shots at the sheriff which started an enormous shoot out. I looked at Hannah's wide eyes, raised my eyebrows at Eric, and shuffled the family off discreetly as soon as I could to areas outside the "town" where we couldn't see the show. She rode a pony, shopped at the general store, rode the train (which gets pretend robbed by some less-than talented actors), rode the carriage (which also gets pretend robbed), rode the paddle boats, mined for goal, got her face painted at the Native American camp, and shot a bow and arrow. Then we had a disgusting lunch at the saloon during which another and much more violent show started. We hurriedly finished and skirted out of there walking behind the buildings to avoid the guns.

I spent the rest of the day reminding Hannah that guns are not toys, and that I do not approve of shows like that. 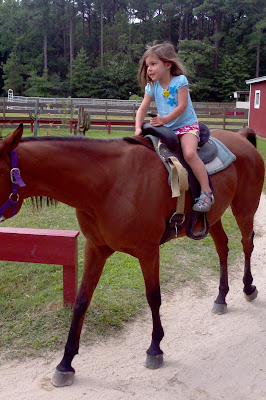 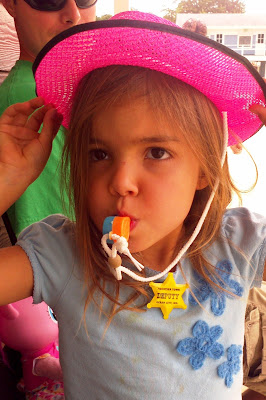 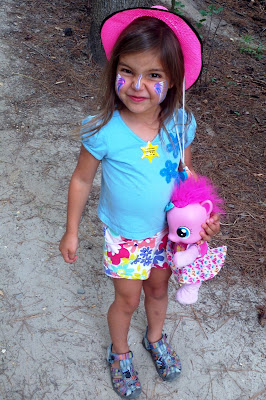 We checked into the condo that afternoon and Grammy and Winnie met us there a few hours later. 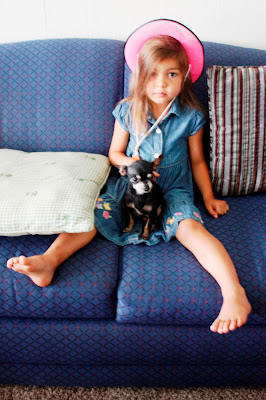 That afternoon we braved the crowds at the indoor mini golf place, and Eric and I duked it out on the greens. I was ahead until I wasted 7 puts on one hole at which point Eric seized the lead and won by 2 points.

Since we didn't end up getting the house we'd put in an offer for at the beginning of the month, we decided not to stress about money while on vacation, and to do every little thing that we thought sounded fun. By this point in the vacation, we were well on our way, but it gets better.

On Monday morning while Jacob napped, Eric and I took Hannah for a ride on one of those two-person bikes. We rode down the boardwalk from end to end taking note of places we wanted to revisit (Hannah set her sights on the Haunted House and talked about it relentlessly). 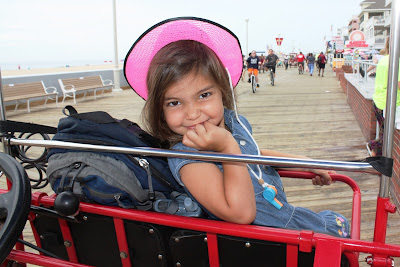 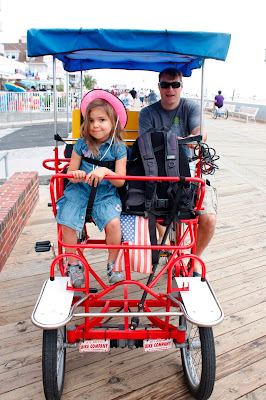 Monday was cloudy but no rain and not too hot: perfect beach day in my opinion. Grammy came with us, and we juggled the baby between the three of us and tried to keep Hannah from covering the blanket in sand. 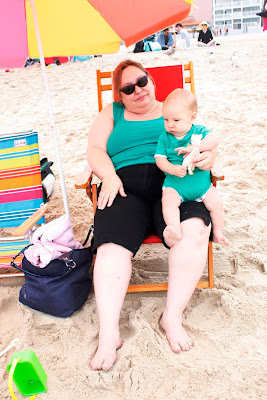 We took advantage of having an extra set of hands and had Grammy take a rare family photo. 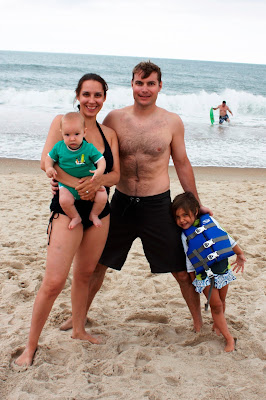 She took the next few pictures with her camera.


At one point we left Grammy on the beach with both kids (the baby was napping on her shoulder), and Eric and I went on mini date number 2: destination Thrashers french fries. When we got back, Grammy took Hannah to the boardwalk and bought her the dress she's wearing in the next picture.

I don't know where this kid learned to pose like that. We don't have magazines in the house except a few old, unread issues of Whole Living. Is the media that hard to escape???

On Tuesday we did something that I had always wanted to do and that I was dying to share with Hannah: the Jolly Roger water park. Who doesn't love a water slide? I'd been planning this for months, and it's the main reason we recruited Grammy to join us for a few days. Unfortunately, we were a year too early. Aside from the kiddie section which Hannah was not a fan of because it sprayed, splashed, dropped, and poured water all over you the whole way from the ground up to all of the slides, the other slides required a minimum height of 42 inches. Hannah is 41 1/2. It was a hot day outside of the park, but breezy inside, and although she liked the first water slide she got on, she was freezing from getting soaked on the way up and refused to endure that soaking again. We snuck her onto one four-person ride (picked up a random kid to join us who was also part of a party of three), but really, we shouldn't have. She loved it, but she really was too small, and it wasn't safe even though Eric and I each clasped a wrist.

Since she couldn't ride much and since neither Eric or I wanted to stand in any of the lines alone, we took Hannah back to the condo after a couple of hours, I nursed Jacob, and then we headed back to the park where we had our third and final mini date of the trip. We ran all over that water park and got on just about every water slide in the place, moving through each methodically the way we worked our way through all the trails in Zion so many years ago, then we went back to the condo, picked up the family, and headed out for a seafood buffet dinner--another Ocean City must.

Grammy left on Wednesday morning, and we spent most of the rest of the week on the beach. 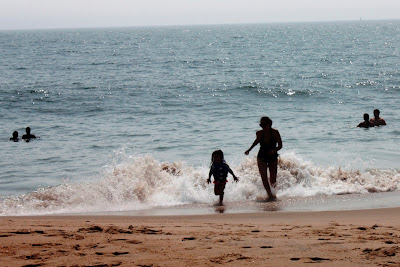 LOVED this Go Pod that our next door neighbors gave us for Jacob to sit in! 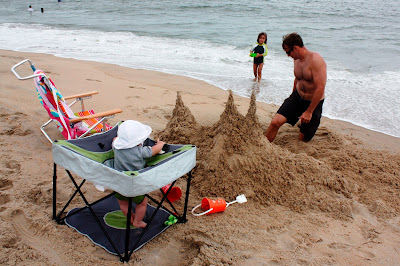 On Thursday afternoon we walked down to the pier to let Hannah ride the rides at the Jolly Roger amusement park. Jacob and I stood by watching. He's obviously too little, and I don't do rides due to my extreme inability to be on anything that moves as fast as or faster than an elevator. 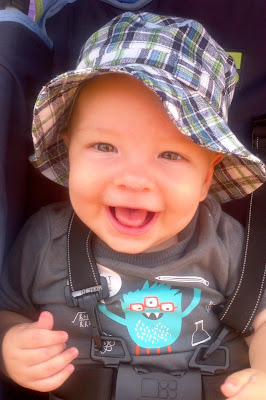 We  spent our last day at the beach, and I decided that next year, we most definitely need to be able to fork out the extra cash on a place that is actually on the beach because schlepping back and forth multiple times a day with all that stuff and all these children is exhausting. If Jacob would have napped on the beach, it'd have been easier, but since he wouldn't, I walked back and forth from beach to condo all day, and I don't know if you've held him lately, but he's heavy. He's gotta be 20 pounds by now. I wear him in the carrier almost constantly because he's too heavy to carry any other way, so I ended up with him on my front and my backpack on my backpack walking the four blocks to the beach four times a day, and by the end of the day, my shoulders and neck and back were screaming at me, and I was farther from relaxation than when the trip started.

The only thing I wanted to do, the only thing I ever want to do--in other words, all that I want out of life--is to sit in my beach chair, dig my toes into the sand, and read my book while the waves crash in the background and the wind blows through my hair. Fantasy unfulfilled. If we were beach side, at least when Jacob was napping I could have sat on a balcony or porch or something and read on the beach. I could even tap in Eric and let him sit around and read while I played with Hannah. Instead, I spent most of the time straightening up the condo and reading there while Eric jumped waves and built sandcastles with Hannah.

Still a nice trip, and I'm grateful that we got to go, but I see room for improvement, for a simpler, more relaxing vacation, and I can't wait to execute it!
Posted by terri at 11:28 PM