Hannah the hairdresser cuts her own hair

This morning I walked into the bathroom to find Hannah snipping away at her hair with the scissors Eric uses to trim up his bangs (are they called bangs on men??). I dropped jaw and cried out incredulously, "what are you doing???!!"

Then my mind caught up to my shock. I remembered that it's just hair, that it will grow, and that she's just a kid. I remembered reading Jada Pinkett Smith's defense of her daughter, Willow, cutting off her hair, and I remembered thinking, "hell yeah! That's the kind of mom I want to be." I remembered how I cringed when Hannah once told me she wanted to have long beautiful hair like a princess, and I realized that here was our chance to spit in the face of the long-hair-equals-beauty standard that media has effectively shoved down her throat.

All these thoughts went through my head as Hannah's face crumpled into sadness, and then I burst out laughing and apologized profusely, assuring her that it really didn't matter and that I wasn't mad. She told me that she wanted hair like her friend Julia (who cut her own hair a few weeks ago). She said her hair makes her neck hot and gets in her way when she sleeps. I reassured her that this new haircut was going to be great--it'd be cool and easy to brush and there'd be far less of it for Jacob to grab and pull. She was excited. She had a moment of sadness for her long hair lost, but I ran through all the salient pros to short hair again, and she's been smiling ever since.

Earlier this week I scheduled both of us for a haircut on Friday (we were talking about this appointment this morning minutes before she took matters into her own hands), and I see no need to change the appointment so she'll be walking around with half-butchered hair for the next 2 days, and then I'll have some pictures of Hannah's new short hairdo this weekend.  (If it's long enough, she likes the shattered bob haircut on this page, and it looks easy to maintain, so I like it too. She took it pretty close to the scalp in a few places though so she might have to go shorter.) 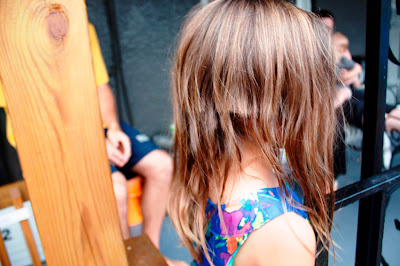 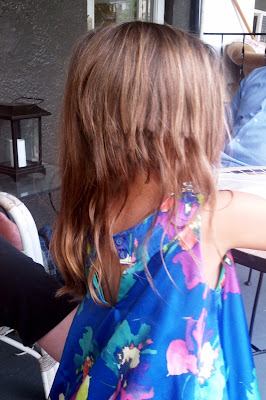 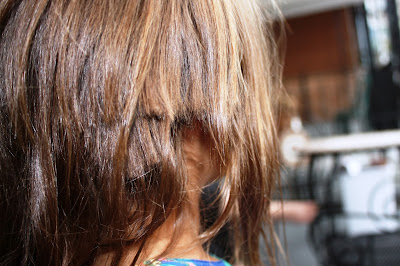 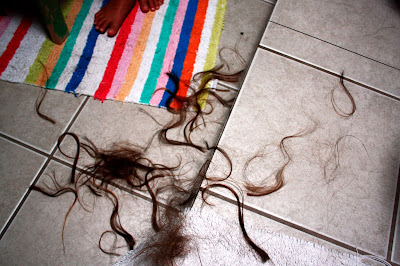 I don't really think it's a big deal if she does it again, as long as she knows I'm not going to race her off to the hairdresser to "fix" it every time she wants to play barbershop; however, she could have taken off an ear with those scissors so I think we'll move them to higher ground until she's a bit older.
Posted by terri at 9:26 PM