Today is Hannah's 4th birthday but I'm not going to tell you about our 3-birthday extravaganza because those pictures have not yet been freed from the camera. Instead I'm going to tell you about the Orioles game we went to last Sunday with Autumn, Kim, and Aaron. I'm ashamed to admit that in spite of being proud Balti-morons, this was Hannah's first game...We didn't make it to one the first 2-3 years because the Sunday afternoon games were prime time for naps, and Hannah's sleep schedule was nothing to be messed with. Messing with it resulted in melt downs, and no matter how much fun an activity was, it was never so fun that I didn't regret having done it when the melt down ensued. Hannah gave up naps pretty early on though so we don't have a good excuse to not making it to a game last year.

We opted to get the full experience and take the light rail down. I got so motion sick on that thing that I had a melt down of my own and had to get everyone off a few stops early. I haven't been that sick in years...Next time we'll deal with traffic and pay out the nose for parking. This time we ran, all to eagerly to the light rail. Excited, much?

Our seats were in BF Egypt, in a section reserved for cheapskates like us. The view was terrible, but the shade was fantastic, the empty seats around us were great for spreading out, and I'm told it was a boring game anyway. I wouldn't know; I spent so much time walking around that my legs felt like boulders as we trudged up 3/4 of a mile of straight up hills all the way home from the light rail, and blisters grew and then popped on my feet.

I don't know why I walked around so much other than that one trip back to the main gate area from where we were sitting was probably close to a mile each way. I went back with Autumn and Hannah so Autumn could get pit beef and I could get those first game certificates for Hannah and Jacob. I found out later that there is a fan assistance office on the upper level where I could have picked one up...but that's okay, we mosied over to the kid section while we were out and let Hannah play some of the games. When she stood with her back to the plate they'd set up in the little batting practice area they had, I realized that we desperately need a yard so we can play ball with this kid!


After the games I took Hannah to one of the little shops and bought her a shirt and foam finger. 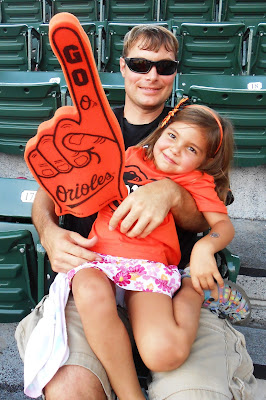 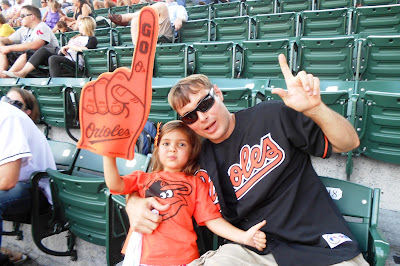 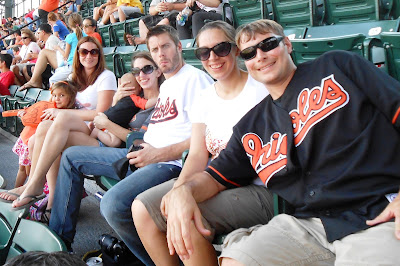 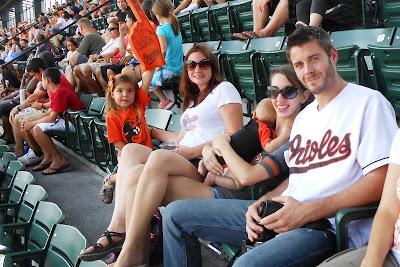 When I got back, I sat down for a few minutes and then needed to feed Jacob, but he wouldn't nurse where we are. He might fall asleep pretty easily, but he is a very high maintenance eater. Most of the time I have to lay down in a bed in a quiet room to get him to eat. There are not maybe places like this when we're out so he'll hunger strike. I packed him into the carrier and walked back down the stairs to try to find a cool, quiet place to nurse. The fan assistance office had a little closet with a door and a chair, and it was enough. He settled down and ate.

With the Orioles hat he inherited his sister and the Orioles onesie he inherited from his cousin, Jacob was our group's biggest fan.
Second kids don't have the luxury of being catered to quite as much as first kids. At the same time, I try to be fair and act according to his best interests. I get flack for this from people who think that babies are accessories who can just be schlepped around whenever and wherever, and some are that laid back, but mine aren't. Even Jacob who is much easier than Hannah still prefers to sleep in his own bed, and that's what's best for him so although I often request that he take a midday catnap on-the-run (instead of a short evening nap), I try to make sure we're home no later than 3:00 so he can have a good late afternoon nap. He did not make it home by 3:00 on the day of the game though. And he wasn't too much of a wreck for it. He took a few cat naps throughout the day and made it through.

I missed a lot of Hannah's firsts this summer, including her first (and second, third, fourth...) time tubing and her first time picking berries at a farm, but I was not about to miss her first Orioles game! If you are trying to decide when to have a second kid, my advice is fall/early winter. That's a good time to be couped up indoors with a newborn. I'm missing out on a lot of fun this summer, and it's okay, I know it's only temporary and the baby phase passes so quickly, and really, this baby gives babies a far better name than his sister did, but it's still hard to have a rambunctious 4-year-old and a baby in the summer months when there is so much fun to be had! It's also hard to meet everyone's needs: one kid needs to constantly be run like greyhound (Operation Exhaust Hannah begins anew every morning) and the other needs to constantly nap. Meeting everyone's needs often means Eric and I divide and conquer. Again, it's all fine, but if I had to do over, I'd aim for a fall baby. In the meantime, go O's! 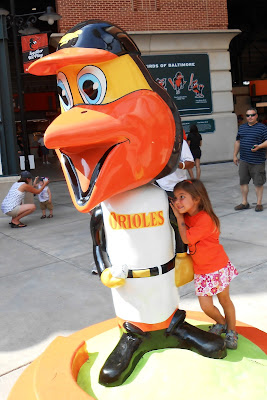