Meal times take no less than an hour at our house, mostly because Hannah isn't much interested in eating and does so only while distracted with her doll house or some other toy. I indulge her, not so much because I worry about her starving, but because I know that if she doesn't eat well at meal times, she insists on eating at less opportune times, like when she's supposed to be sleeping.

Anyway, we were scheduled to spend Friday, the day after Clay's 2nd birthday, with Clay and Uncle Chip and Grammy in Hagerstown, so I did my best to speed up the typical hour-long breakfast process.  I was thwarted from the get go though because Hannah insisted I take pics of her posing with Lila before she eat anything. 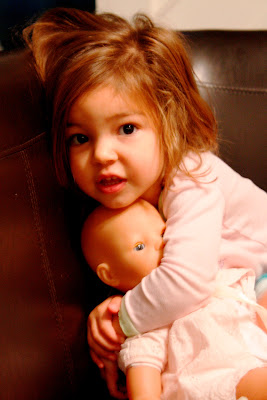 We made it out of the house eventually and got to Chip's shortly after 10 armed with birthday presents.  We spent the better part of the previous morning at our local toy store, me looking for just the right gift while Hannah tried on tutus, snuggled all the babies and stuffed animals, and pushed the giant wooden train around it's giant wooden train track. We emerged with some maracas and this Kidoozie microphone because Chip said that Clay loves microphones and the one attached to his kiddie keyboard is broken.  This one is cool because you can plug an iPod into it and sing along to your favorite songs, but I'm cringing now because I just searched for it on Amazon so I could link it, and the reviews are terrible....Well, he had fun with it that day, and with any luck, his microphone will last longer than those owned by the reviewers. 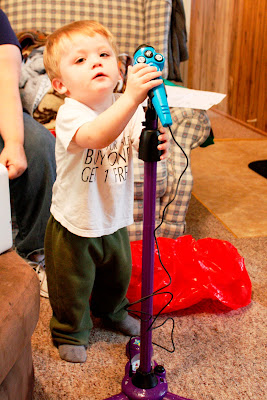 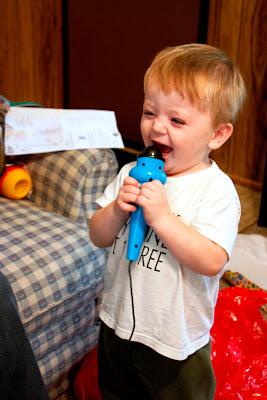 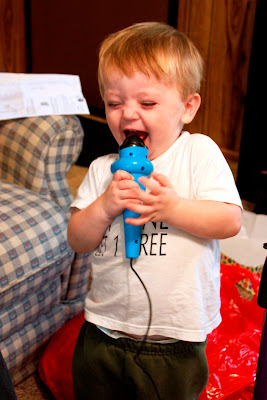 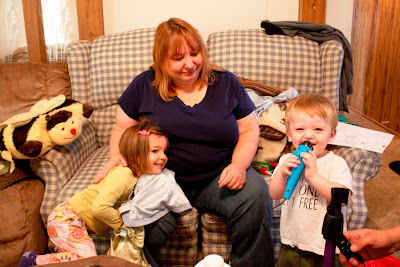 We spied cows out the back window then and got the kiddies bundled up for some outside play. Hannah climbed up on Clay's bike while my bike was turned and fortunately didn't topple it in the time it took me to turn around and resume protective mom duties. 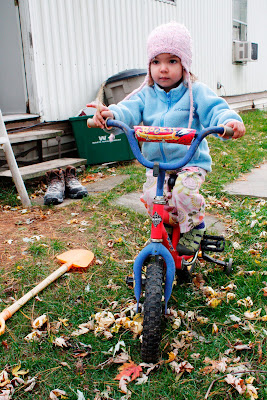 Then she found a chair and pulled it up to the fence to watch the cows.  Better than TV!! 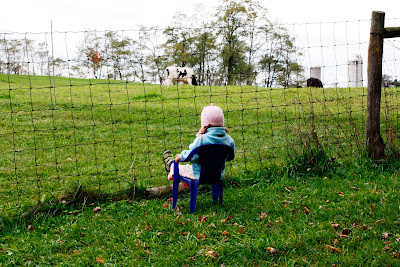 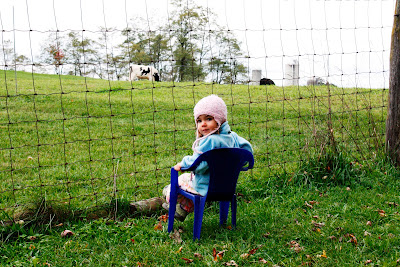 We went to the Pennsylvania Dutch Market for lunch and let the kiddos chow down on fried chicken and potato wedges (and Hannah, an avid broccoli lover, gobbled up the broccoli I had packed for her). 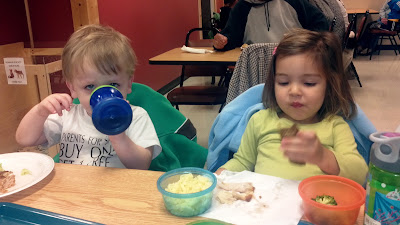 After lunch we headed back to Chip's and spent the rest of the afternoon looking through my grandmother's salt and pepper collection which she left to me in her will.  There were four boxes of shakers, some of which were reeeeaallly cool!  Grandma died when I was still in college, but the shakers were MIA for a while and just turned up again recently so that's why we are just now getting to look at them. Everyone in the family picked out a set to keep, even Hannah.  She picked out a kangaroo set: a mama kangaroo pepper shaker with a baby kangaroo salt shaker that popped in and out of the pouch.  Super cute.