After16 weeks of serious training, Eric ran his very first marathon on Saturday morning.  His only goal was finishing, but somewhere in the back of his head, he was also hoping to do it in less than 4 hours, and he did! he made it in 3 hours and 53 minutes.  I snapped this pic of him right before he left at 6:30 a.m. with the intent of posting it to Facebook with a good luck mantra of sorts, but my morning as a marathon runner's groupie ended up being way crazier than I expected. There's a learning curve there....I'll do better next year. 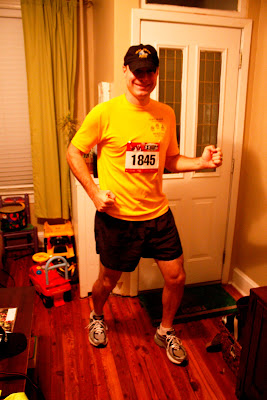 After seeing Eric off, Hannah and I got started on our morning routine.  The race started at 8:00 a.m. and mile 3 was the zoo so the goal was to head there first to cheer, then try to make it to a few other locations.  My dad and Sondra showed up by 7:30 and helped me get Hannah ready and out the door by 8:00. We made it to the entrance of the park by about 8:20.  Eric runs about an 8 minute mile so we were cutting it close, but we should have still made it...We never saw him though.

When the crowd of runners thinned out to walkers, we booked it back to the house to print out the map and plan our next stop. I'd have done all this sooner, but it was a busy week and we had to drive to Annapolis on Friday night to buy a new car (a different post altogether) so there was no time for me to plan.

The thing with the marathon is that it's 26 miles up and down and all around the city so if you want to get anywhere during the marathon, you have to drive all the way around the route.  Luckily, we're at the northern border of it so we can at least get out and get around.

We decided to drive all the way to the southeast corner of the race to cheer him on from Patterson Park and then try to make it back to 33rd Street for one final cheer, but on the way to Patterson Park, we drove by the Lake Montebello aid station and decided that was a better place to be since we weren't sure we'd make it to Patterson Park in time anyway, and I didn't want to miss him again.  Lake Montebello was mile 20 so if we missed him there, there'd have been no room for redemption.

We had close to an hour before we saw him so we took a few pics while we were waiting. A note on these pics: I was fiddling with the white balance that morning and then never changed it back to automatic and also never used the playback feature to look at the pics as I was taking them so they are all turned out very blue. Every last one of them.  There's no editing out that much blue so I just made them black and white. 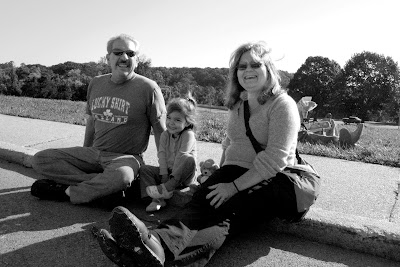 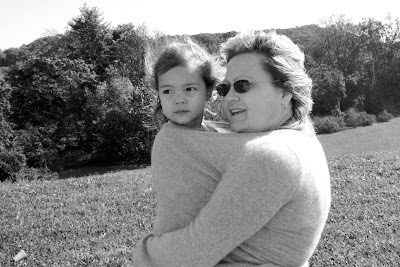 A lot of runners passed while we were waiting, and I was starting to worry that we'd missed him again, but in a crowd of 22,000 people, we finally found him! 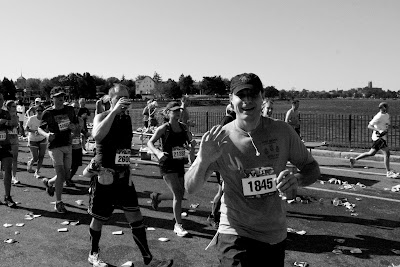 After waving him off, we hightailed it down to Camden Yards in the hopes of watching him cross the finish line. Nope, that didn't happen. No clue where the finish line even is.  It was pure madness down there.  Luckily Eric borrowed random people's phones to call me and find me in the crowd. He had to do this twice because I was so frazzled, that I wasn't clear on where we were meeting after the first call in spite of the fact that I was the one who said where to go.

Anyway, we finally found him and got to congratulate him!! Woohooo! Unfortunately, I'd forgotten to bring his drink and the marathon cookies I made him...I was not a good groupie, but I'll be ready for next year! 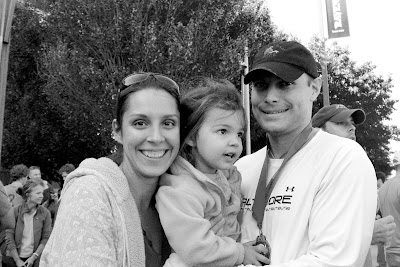 Yay Eric!!!! Congratulations on your first marathon!!
Posted by terri at 9:53 PM