Feeding the Ducks with Pappy

We drove to Hagerstown today so Eric could help my mom out with some broken things around her house. I dropped him off and then Hannah and I headed straight for Pangborn Park to meet Pappy. She doesn't do well being strapped into a car seat for long periods so giving her a place to immediately stretch out and run was a priority.  I've always loved Pangborn. It's got great tree coverage, a nice pond, and is a perfect not-too-big-and-not-too-small size.  As a bonus, this is also the park where my dad works so of course he keeps it clean and beautiful! 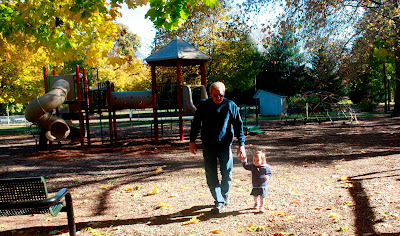 So, in addition to the previously mentioned bonus points for Pangborn Park, there was one unknown bonus: ducks that are sort of trained.  I was heading for a trash can with an apple core in my hand when my dad suggested we feed it to the ducks. We started with the closest ducks, but they took off so he suggested we go feed the trained ducks.  Trained ducks?? Whaaaaat?  So we started walking over to where this group of ducks was all huddled down beneath a tree. When they noticed us, they all stood up and and quickly waddled to us. I guess they're trained to know that the animals who walk on two legs typically have food. Anyway, when they got close, my dad held up his hand in the air, and the ducks stopped where they were and just waited for us to approach them!! How crazy is that! He's like Dr. Doolittle or something. Then he took out his pocket knife and started cutting up small pieces of the apple for Hannah to feed to them. Those ducks were eating right out of her hand!! It was crazy and awesome and definitely the highlight of our week!! 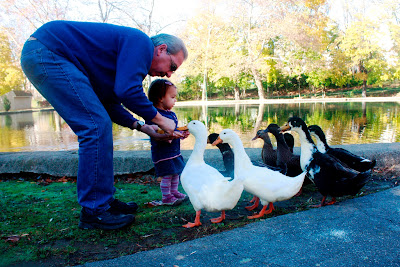 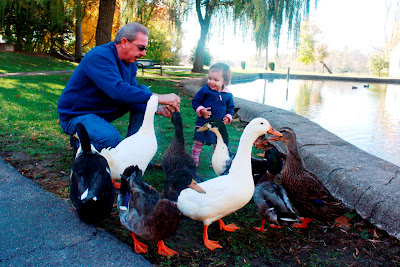 After they'd eaten most of the apple, they jumped in the pond for a swim. Hannah thought this was a fantastic idea and tried to follow them.  She was none too happy about being held back. 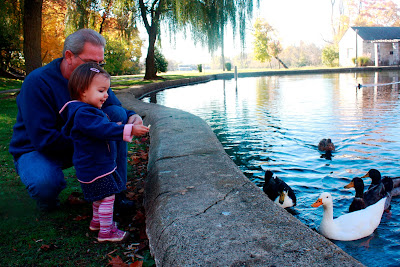 After a couple of attempts to jump in, and a number of fits verging on temper tantrums, we decided distraction was our best bet.  Lucky for us, Pappy brought a yellow bouncy ball which we took to the opposite end of the park.  Then Pappy taught Hannah how to kick the ball. 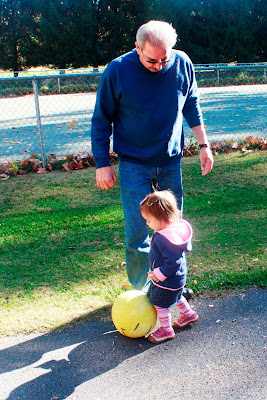 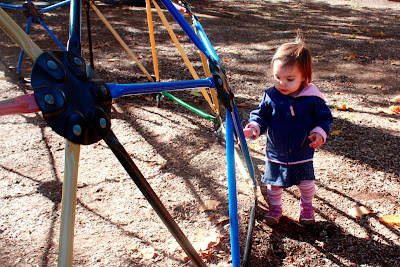 After an hour or so at the park we headed back to my dad's house for lunch and a nap. I wasn't sure how the nap thing would work and figured I had two options: 1) put her in a playpen and sit by that playpen while she screamed for up to an hour until finally falling asleep, 2) lay down with her, latch her on, and cross my fingers that she nursed until she passed out. I opted for option 2, and surprisingly she passed right out and stayed that way for an hour and a half. She would have slept longer but I woke up after about 45 minutes and was getting bored, thirsty, and antsy so once I knew she'd met her 90-minute sleep cycle, I took back my boob which woke her.
Dad brought out a big basket of toys then and we played on the floor for a bit.  At one point, Hannah tucked her lips in, hummed, and leaned in for a kiss. I miraculously had the camera in my hand and, knowing what that humming and lip pursing meant, stole a picture.  She really gives the best kisses. I'm glad Pappy got to experience a Hannah kiss. 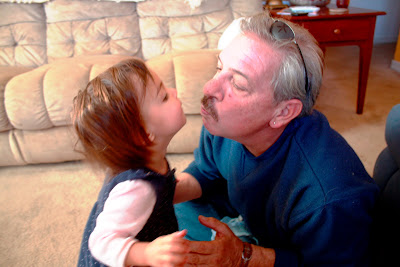 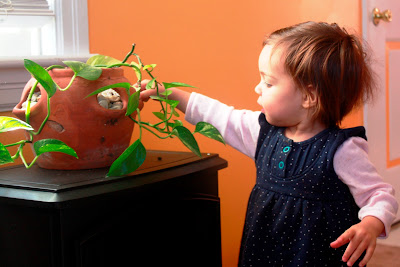 Hannah found this book in the basket, handed it to Pappy, and then laid down on the floor to listen to a story.  After one read through, she started signing "more", and I caught it!! See in the photo below how she's signing more?  How fun is that! 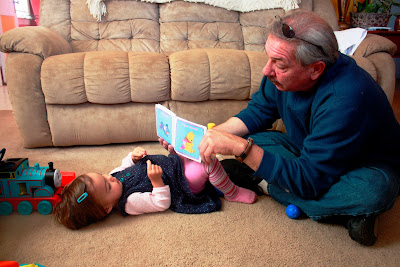 After a little more playtime we headed over to Grammy's to see how her and Daddy were doing and to get in a little QT with Grammy before heading out. For some reason I didn't pick up my camera there...But Hannah had fun playing with the teeny tiny dog who growled at her, jumping up and down and rolling around in the crib, and crawling in and out of the empty upstairs closet.
It was a fun trip, but I'm not motivated to make it any more often.  Hannah spent much of the car ride yelling and fussing and screaming and trying to get out of her car seat, which just stresses me out and makes me tense and makes the whole ride difficult for me. Eric sat in the back on the way there which helped her a bit I think, but I still stressed when she screamed. I got stuck in the back with her on our way back to Baltimore which, given my propensity for any kind of motion sickness, made it more miserable for me. I had to juggle being car sick with entertaining a very frustrated baby.  Not fun. I called my mom during a particularly bad crying spree (her, not me) in an attempt to prove to her that I have a good reason for never driving back there, but she didn't sympathize, just said lots of people had kids and still found ways to travel, like how she used to get us up at 4:00 a.m. for road trips because then we would still be sleepy and would sleep in the car so she wouldn't have to hear our mouths....I don't see me getting up at 4:00 a.m. any time soon. I do, however, see me continuing along on my current path of refusing to go anyplace that requires us to be in the car for more than 25 minutes.
Posted by terri at 9:29 PM