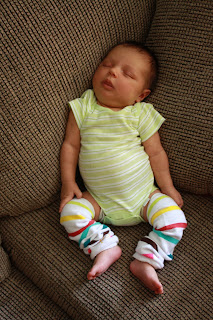 Last week my friends Brooke and Annie came over to meet Hannah and as I was showing them all we've done to the house (which is nearly complete now except for the kitchen), Annie asked if I went crazy trying to get things done before Hannah was born. The short answer...no. I think things were so insane at that point, that it actually calmed me down a bit. There comes a time when insanity hits the roof and becomes zen-like. That was me during the last month of pregnancy. There was little I could do and I realized that and was okay with it. So I just did what I felt like doing (which was minimal since anytime I cleaned, a layer of drywall dust quickly covered things again). Annie said that that was strange since all the pregnant people she knew went into overdrive with "nesting". Considering we've been remodeling this entire house since December, I wouldn't say that I've shirked the typical nesting trait, only that I did way more over way longer of a period of time and therefore had no momentum left for the final push that many women talk about getting right before they go into labor. (And anyway, I didn't go 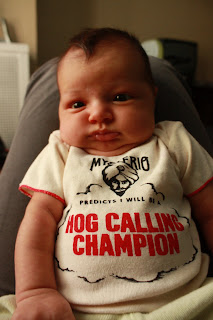 
A few days before Annie's comment, my next door neighbor said I seemed a lot more calm since Hannah's birth. Eric agreed. While I'd love to accept some sort of award for "most natural" mama or something else pertaining to saint-dom, I'm pretty sure my calm has much less to do with the arrival of my screaming bundle of joy and more to do with the recent simplification of my life. The calm actually set in when I moved to Virginia Beach and began working part-time from home. I took up such activities as couch sitting and TV watching (rather than frantically and frenetically ru 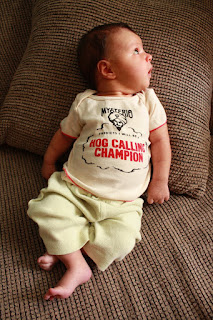 nning from task to task, place to place, insanity to insanity). Those few months were a pretty grand time period. I suppose I slipped into the old Terri ways when I moved back up here in April and went back to work full time for the world's craziest boss. But now that Hannah is here, I'm back to being unemployed and I must say, it suits me well. I'm not saying motherhood is easy (by no means!!), but having only one focus is easier than having so many. Since the house is still in final finishing stages, I can't really clean much, and since I'm still bleeding (4 weeks later-helloooo! It can stop anytime now!), I can't go to the gym so really, the only thing I have to focus on is being a mom and while that's a pretty big thing, I'm so used to trying to do everything, that trying to only do one thing (albeit one very foreign thing) isn't too bad.
Mom-dom has gotten increasingly more challenging this past week and a half. Hannah has taken to screaming loudly and longly for no apparent reason. She did this in between gulps from the boob 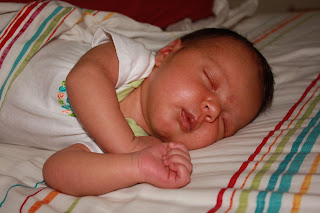 between the hours of 1 and 3 a.m. on Sunday night. I nearly cried with her
(it wouldn't be the first time), but I managed to hold it together. I alternated between burping her and feeding her (sometimes she would take the boob which brought immediate quiet and relief, other times she pushed me away and screamed louder). I threw in multiple "shhhhs" and 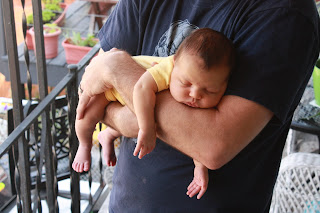 pats on the back all to no avail. The screaming was so loud at some points that I laid her down on the bed beside me and just looked at her hopelessly, wishing I spoke "shriek-eese". Finally I gave up and did what I learned in The Happiest Baby on the Block DVD. I swaddled her up tight, held her on her side, swayed her back and forth, and continued to shush her. She silenced almost immediately and was asleep not long after. The only reason I didn't choose this option sooner was that she hadn't eaten much at that feeding (too busy screaming) and I worried that without a full belly she'd be up screaming again in no time. She managed to stay asleep until 6 (although Eric's alarm woke me up at 5:15 and the 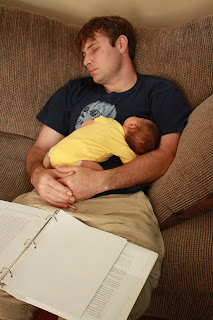 n again at 5:30. Since he was already up and in the bathroom during the 5:30 alarm, I had to turn on the light and search frantically for the off button all the while crossing my fingers that Hannah would sleep through it).
She's stirring on the couch beside me so I better wrap this up lest I end up in the midst of another screaming session...That top pic of her in the legwarmers is current. She's sitting beside me while I type and was sleeping away until a second ago. The next one down cracks me up. She's wearing her shirt that her Auntie Laura bought her at Red Tree. The shirts come in a little bag and you can't tell what they're going to say until you open them, but all are some form of "Mysterioso predicts I will be a..." Hannah got "Hog Calling Champion." Suuuuuueeeee!!
In addition to the other random pics from the last week is one of her napping with Eric on Sunday. He was studying (hence the notebook on his lap), but I suppose her nap was contagious...I can't judge him, I know how contagious her naps can be.
Posted by terri at 4:39 PM