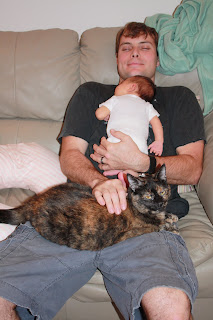 So far Hannah is not a terribly fussy baby, though she has her moments, most of which are usually in the late afternoon/evening hours. She was having one of those inconsolable fits tonight as we were cleaning up after dinner. I figured it was good timing because we had planned on giving her her first real bath in the tub last night but were too tired so there was no getting out of it tonight. Since the sponge baths throw her into hysterics, I had every reason to believe that a real bath would be hysterics cubed, so since she was already freaking out (as opposed to sleeping peacefully), I was motivated to put a rush on the bath thing and get it over with.

I carried Hannah upstairs and laid her in her crib while I readied the bath. Her hysterics got out of control so I raced back into her room, grabbed her from her crib, and put her head on my shoulder. She immediately threw up a bunch of gobby white stuff all over my hair which was hanging in front of that shoulder. So it turned out she had a good reason for crying...And I now have a good reason for permanently attaching a burp cloth to my shoulder. The smell was atrocious!!!
I had every intention of 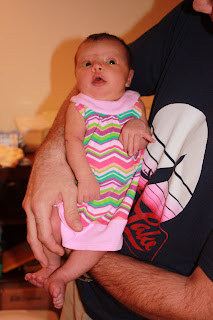 photographing the first bath but due to the hysterics, it was already a two person job without the camera. I don't know how single moms survive. I certainly couldn't get by without Eric.
I did get a really cute post-bath shot. After scrubbing the puke from my hair, I exited the bathroom to find Eric snuggled on the couch with Hannah passed out on his chest and Kaya laying in his lap.
I added another pic of her taken last week in a cute little outfit her Grannah (Eric's mom) bought her.
Posted by terri at 9:02 PM