Hannah's first visit to the climbing gym was awesome!! Within minutes of being there she was running around the soft blue mats (empty at 9:00 a.m. on a Saturday) giggling excitedly.  Jess and Todd got there shortly before us, and Erin and Brody showed up a few minutes after us. After getting everybody checked in and signed off on, we took the kiddos upstairs where there are rooms with clusters of super easy routes.

We ended up inheriting two kids' climbing harnesses a few months ago from the family I used to babysit for (score!!), so we're all set up. We suited up the kiddos... 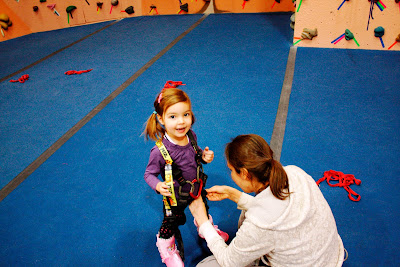 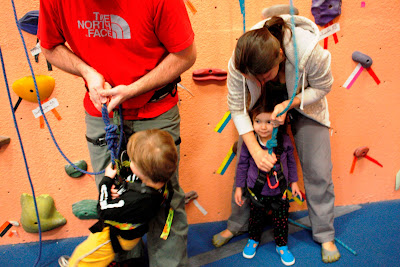 ....and let 'em roll! Hannah took off pretty well (with a teeny bit of help from me pulling on the rope). She had one freak out when she climbed about halfway up the wall, out of Eric's reach, and then wanted to come down. She didn't want to let go and cried out for daddy to get her. Eric climbed up (hurt back and all) just far enough to support her feet on his hands. That was all she needed to let go. He had to do that one other time, but then she was fine. 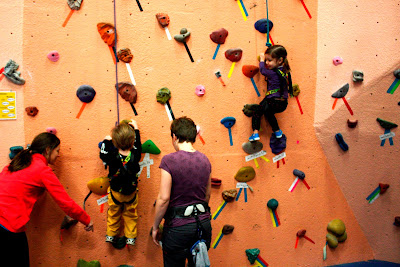 This was a pretty kid-centric visit so us grown-ups didn't get too many climbs in, but we managed a few.  Hannah was mesmerized when Jess went up the wall, and when Jess got to the top, Hannah reached up her arms and said, "I got you Jess!" 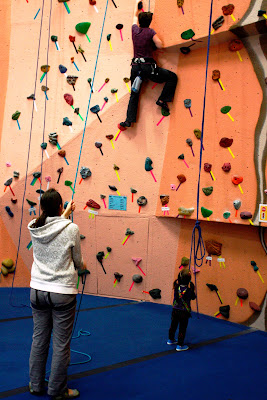 I should note that Eric was on paparazzi duty today since his back is too hurt to climb or belay so a lot of the photo creds go to him. Check out this fun action shot: 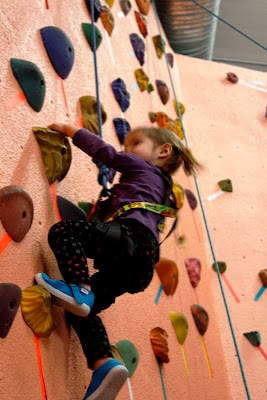 We took lots of snack and juice breaks too. 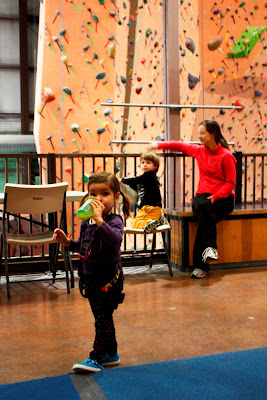 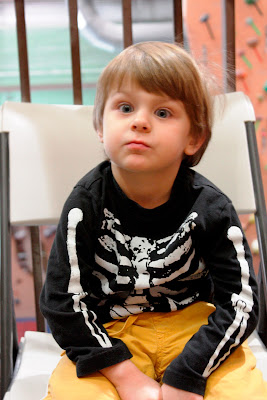 They both seemed to like watching the people bouldering below. 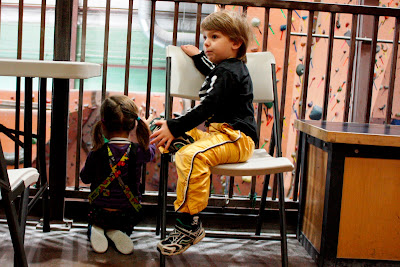 Jess had the bright idea to teach Brody to traverse which was genius for him since it enabled him to hop on and off the wall with ease. 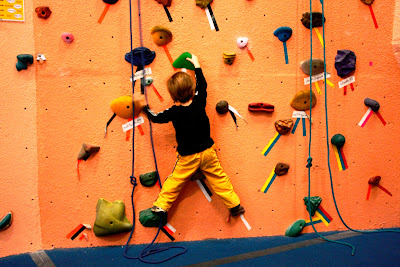 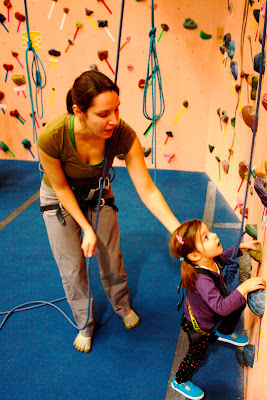 Hannah climbed up just far enough to touch the hold shaped like a red frog and then just hung out there and looked around for a while. I convinced her to put her feet on the giant red hold you see below her knees in the pic below, but that was a mistake. That extra inch caused her second freak out. Once again, Eric shimmied up and put his hand below her feet. 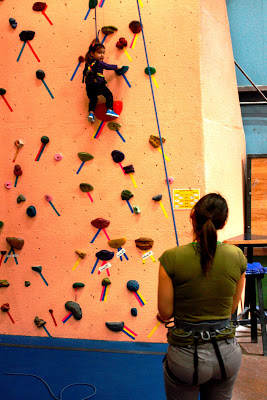 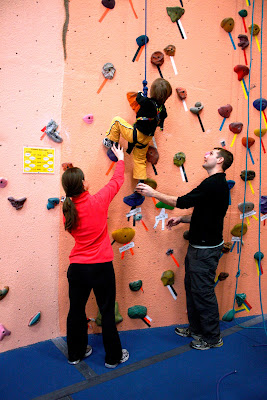 Since Hannah was freaked out those two times, Jess offered to belay Hannah while Todd belayed me so that I could climb on the rope next to her.  That was super fun, and she made it up pretty far that time. 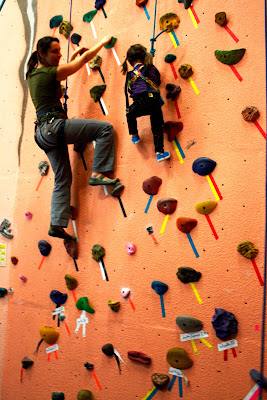 After about 2 hours and probably six or seven climbs (for Hannah), we started packing up, but before leaving, I insisted on a posed shot. 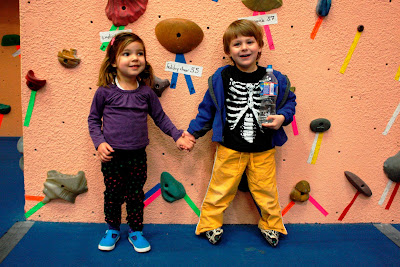 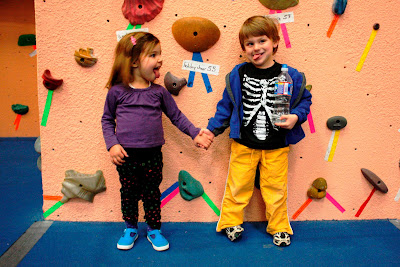 Hannah loves Brody so much that she didn't want the fun to end. She suggested that he come back to our house to play with her new toys and cried when we said no.

We had so much fun that we're considering getting a membership and making this a regular Saturday morning activity. My only hesitance is that we're also talking about removing the goalie in the next few months and taking that next plunge...It's days like this that make me want to just stop with one kid. We're finally able to do stuff like this again. We've got some freedoms and flexibility. Do we really want to start all over again???? I really want Hannah to have a sibling, but man, the idea of starting over again is just daunting. Fingers crossed that hypothetical child number two is laid back and easy and capable of sleeping anywhere and anytime...What are the odds of that???
Posted by terri at 10:15 PM