The woods in May

This will all be old news to most of you, but I was feeling guilty the other night because Jacob's childhood is not so well documented as Hannah's. As a result, I'm back! This will mostly be a series of disjointed memories inspired by the photos I have from May of last year.

So this is May of last year. It was our first spring in this house. This playground was one of Eric's early projects. He found it for free on the trader at work, posted by a person who'd inherited it upon buying a new home and had no need for it. Eric took his tools, took it apart, and brought it back here where he powerwashed it, painted it, and put it back together. We've gotten a few good deals since moving here, but the free playground is probably the best. 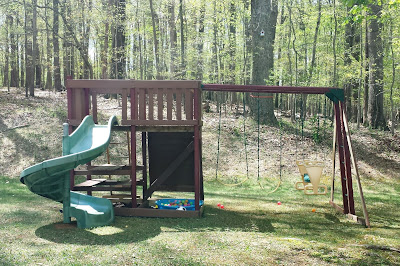 Grannah and Granpah came for Grandfriend's day at the school at the beginning of the month. The warm weather had the kids begging for camping, so we gave in and set up a tent in the backyard. Grannah read the bedtime story, and then I moved Jacob inside. Eric and Hannah slept out there all night. 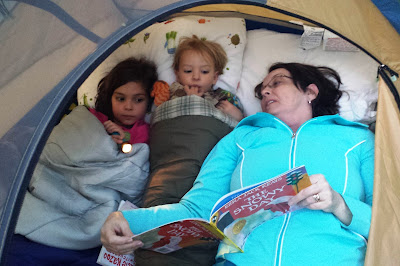 For Jacob's first real haircut, we took him to The Old Bank Barber in Hampden, Eric's favorite spot to get a trim. We haven't been back since though because they give a very short, tight haircut, and Jacob requested longer hair, which Eric and I both love, so he's growing it out. 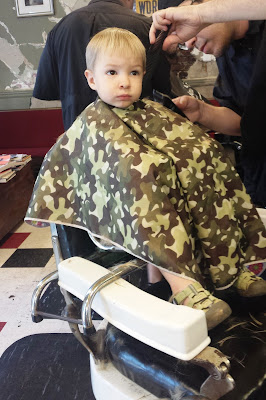 He was not a student this time last year, but I had to be at the school for something one afternoon, and while there, he beelined for one of the kid-sized wheelbarrows and kept himself busy. I think we might get him his own for his birthday this year... 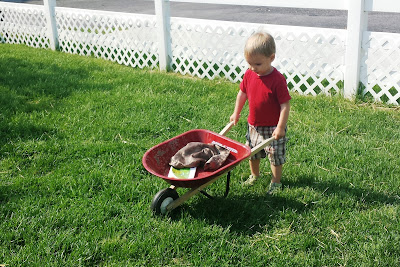 I love these next few pictures! Our woods are a magical place when all the ferns come up. Of course, they grow over our trails so it's hard to get around, and I get paranoid about ticks, but rose geranium oil seems to keep the ticks at bay! 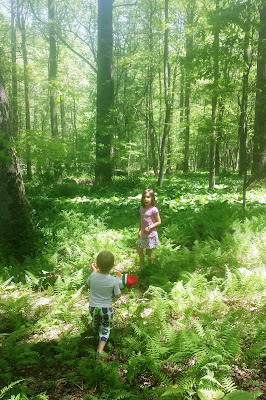 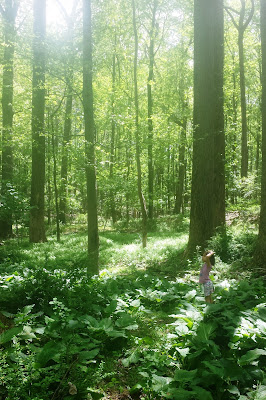 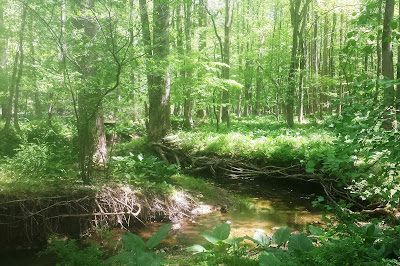 This picture below shows what was Hannah's favorite hidey hole until the day she shared it with a large spider. All along the stream are trees with roots that are partially exposed and make for a great place to climb into. She spent a lot of time playing down there in the early spring with her dog, and then one day later in the summer, she climbed in and was surprised to look up and see a large spider just over her head. She was never afraid of spiders prior to that, so I think it's just that it surprised her and also that since it was over her, it made it difficult for her to get out and away. Anyway, I hurried over and caught her as she leaped out of the spot into my arms, and she never crawled down there again. Actually, she didn't go into the woods alone again. We've spent a lot of time talking about it since then, trying to make sure that all the emotional puzzle pieces stay put together in the hopes of her going past it, and I think she has now, but it took quite a while. 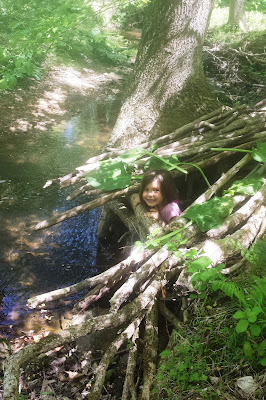 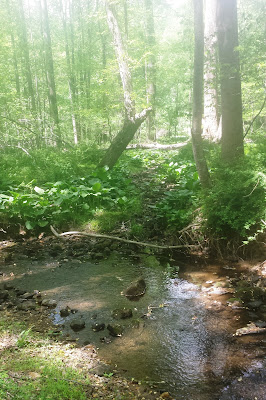 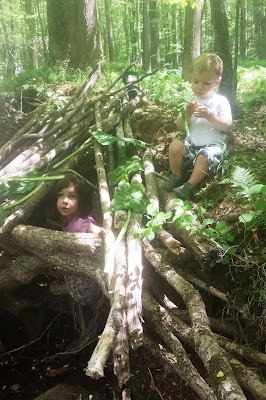 There's our Joy! She was with us for such a brief time, but it was so memorable, and she is missed. She died later in this month, so this is the last post she'll be in. Eric was leaving, and Joy was behind the carport with the kids playing. She was nowhere near the car when he got in, but he stopped then to look at his phone, and when he started to drive, she must have run over and sat down right in front of the tire. He felt terrible. We all did. She was such a sweet dog, and watching her tiny little furry self run and romp in these big woods was so much fun. 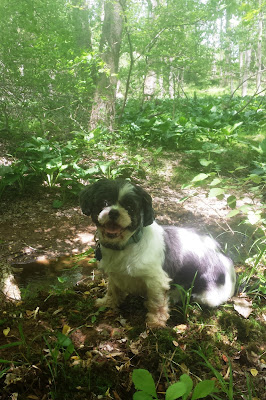 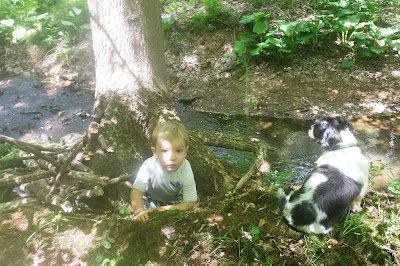 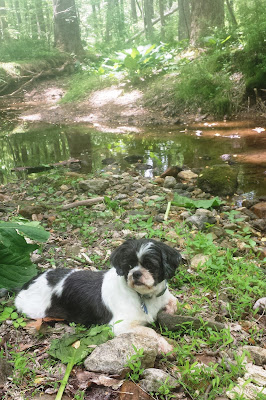 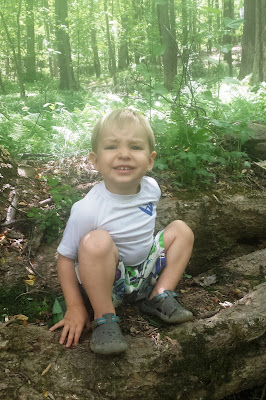 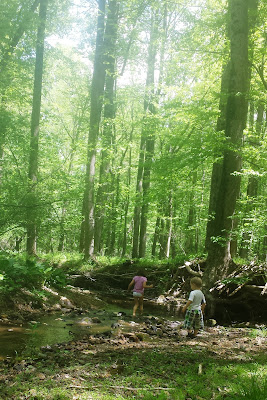 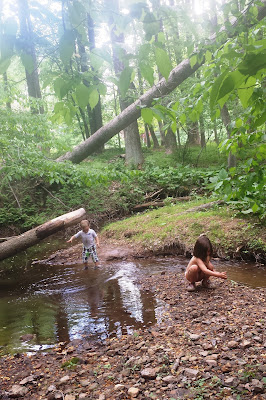 Hannah found a chrysalis on one of her adventures and put it in her butterfly keeper in her room. She did not zip the butterfly keeper though, so one night while we were reading, we were all startled to see a shadow flicker overhead. Fortunately, it was just a butterfly. We hurried to remove the screen from the window so this beautiful Eastern Swallowtail could fly free. 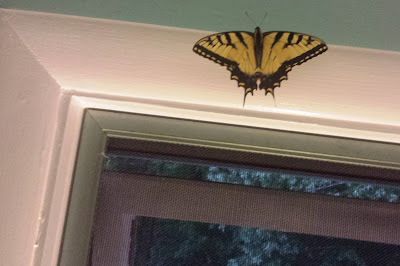 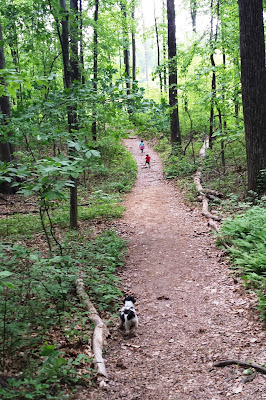 One night after the kids were in bed this little toad hopped onto the windowsill and croaked his looking-for-a-lady-toad song for a few hours. It was awesome! 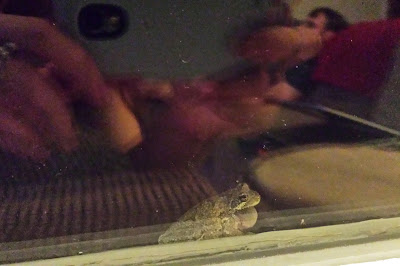 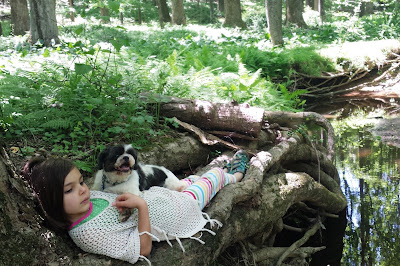 We celebrated Memorial Day with Eric's friends, and one of them brought (and left) his dirt bike. The kids love it! Of course, Eric does too. 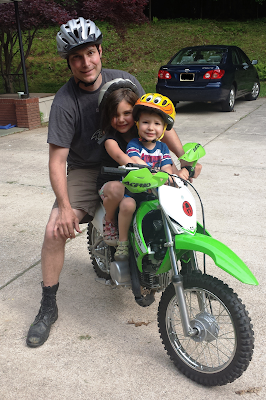 Like his sister at that age, Jacob ends up in some pretty silly outfits sometimes. I love the red socks in this one! 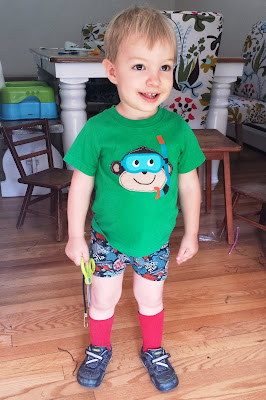 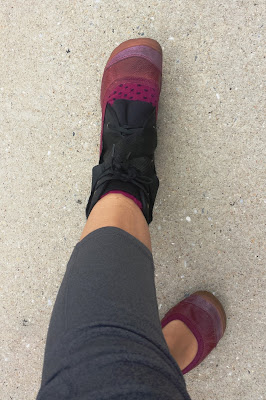 That was May as best as I can remember it at this point, nearly a year ago.
Posted by terri at 9:26 PM