June started off normally enough with 2 trial weeks of Tai Kwan Do, 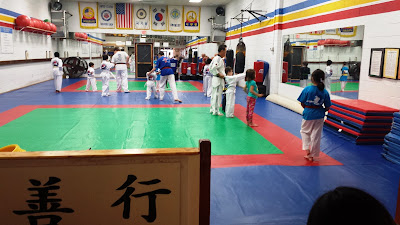 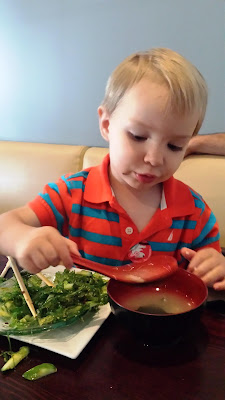 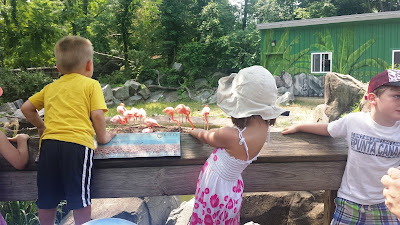 Then things got interesting. 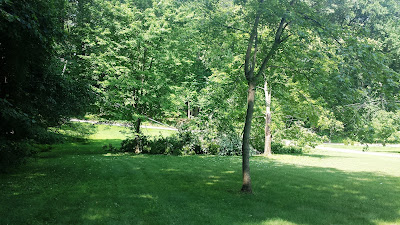 One Sunday morning, Jacob and I drove to the grocery store as we were in the habit of doing back then, and as we were loading up the car with our newly-bought groceries, Eric called and told me not to bother coming home because a giant tree had fallen from across the street and taken out the wires that stretched across our driveway prior to landing in our yard. As it was stretched across the street, no cars could through, and even if I drove around the long way to come in from the other side of the street, there were live wires stretched across our driveway, so I couldn't make it from the street to the yard. Oh, and by the way, the power is out so all the newly-bought perishables will likely thaw and need to be pitched. 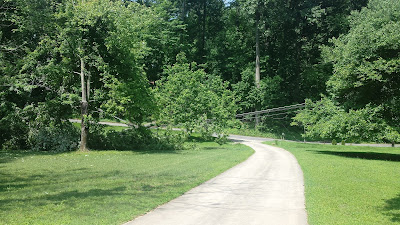 I did not take kindly to his advice to not come home and insisted that there was no place else for me to go with a 2-year-old and a trunk full of groceries. I called our neighbors across the street who welcomed me to park in their driveway. Eric met me there and we trekked across the street farther south where the wires weren't down, through the field, and then when we were far enough from the wires, we took a hard left through the woods to our house. I honestly cannot remember what we did with the groceries. I assume we carried them back the long way as well and attempted to keep them cold. 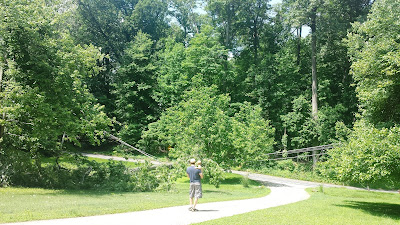 We spent the rest of the day marveling at the insanity of it all, calling friends and family to relay the story to them (which Eric and Hannah had seen first-hand since they happened to be sitting in front of the window when it happened), laughing at the ineptitude of the various utility workers, and wishing for our power to return before everything sweltered in the heat and had to be pitched. 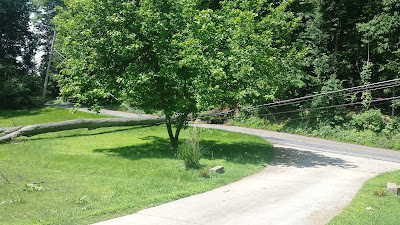 The tree stayed in the street until much later that day when county workers finally came and moved it since it had became abundantly clear that none of the utility workers were going to do it. 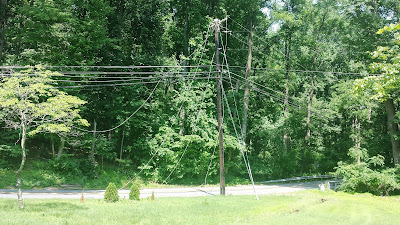 Every day that week our power went off for a few hours at a time while workers came out and attempted to get everything straightened out and fixed. Them attempting to get the piece of fallen tree (because it had been cut by this point) off of the wires was particularly amusing as they managed to slingshot the tree quite a bit. I think Eric caught this on video (he saw it coming and had his camera ready for it), but I have no idea where that video is. 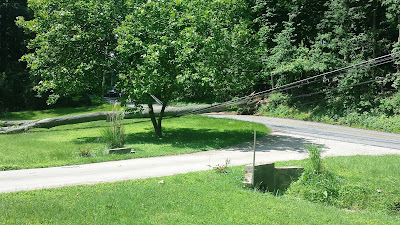 Yard cleanup took forever. We had to hire someone to come and move the trunk pieces to the side of the yard. (It's a red oak so we're hoping to be able to use the wood someday for something.) Then we spent the rest of the summer cleaning up the leaves and branches from the top of that giant tree. Fortunately our neighbor came over with his chainsaw and together him and Eric got the big stuff done in one very hard day (a day in which our power had gone out again so we had no water to keep them hydrated, and this again, is where our neighbors saved the day since they still had their power and thus, their water). 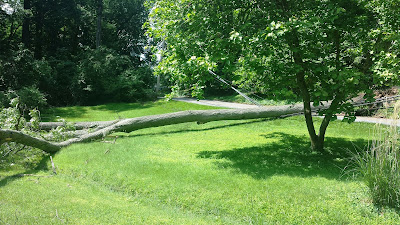 Later that month, after the tree debacle had mostly settled (though long before the work was actually complete), Eric found a set of eyeballs that he said previously belonged to a baby bunny. He assumed that Kaya made away with the rest of the bunny and thought it funny since (according to him) the eyeballs are the only part of an animal you can safely eat raw. Silly cat! I guess she didn't attend that particular lesson in survival school. That or she was just too full after eating the rest of the bunny that she had no room left for even one eye. 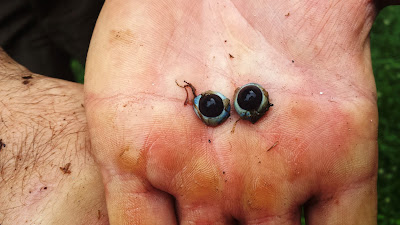 When Eric wasn't inspecting baby bunny eyeballs or lugging branches out of the center of the yard, he was busy cleaning out the concrete pond in the hopes of turning it into a swimming pool. This was no easy task since it first required us to displace all of the frogs and toad and as many of the tadpoles as possible. Then he pumped out a bunch of the water and then got in there with a shovel to dig out all the old stinky leaves. 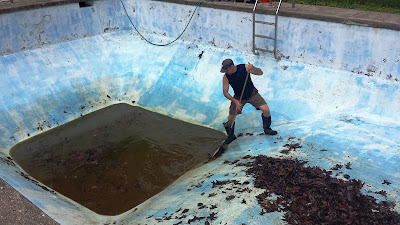 Then he pumped out some more water, and voila! An empty pool. He borrowed a power washer from our neighbor and sprayed down a ton of the chipping paint, he researched the price of new paint, he watched various YouTube videos on DIY pool repair, and then he realized that the work needed to repair the concrete was not going to be fun or fast, so he moved on to another task. The pool filled up with rain water again, the fall leaves fell in when fall hit, and now the toads and frogs are laying egg sacks out there so it will soon be full of tadpoles again, and he'll have to start all over. Fun times! 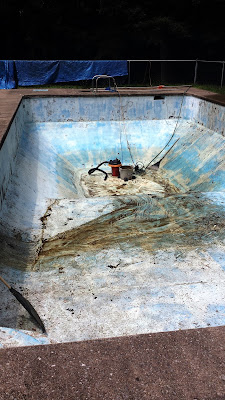 Later in June I took Jacob to the ER for the first time. Hannah had already been three times by the time she was 2, but I had learned a few things by the time Jacob came around, namely that it was wise to buckle them into their high chair and also that although fevers might be nature's way of fighting a virus, Ibuprofen was a good way to prevent a fever seizure. I can't remember why she went to the ER the third time....

Jacob's trip was not nearly so terrifying or urgent. A few days earlier, Hannah had pulled the towel that he was standing on out from underneath him and he'd hit the wooden floor hard with his head. It didn't seem like a big deal at the time, but he acted strange in the days that followed. I called the pediatrician who assured me that the symptoms (which I can't remember now) didn't match those of a concussion but said to bring him in so she could be sure. She felt the bump on his head and he flinched pretty bad, more so than she thought he should have considering the wound was a few days old by that time, so she recommended we go to the children's emergency room and have it looked at just to be on the safe side. We had to wait for a long time both to get the cat scan and then to get the results, and he fell asleep while waiting, but fortunately, there was no fracture. It was a really hard hit, but it was all intact. Whew! 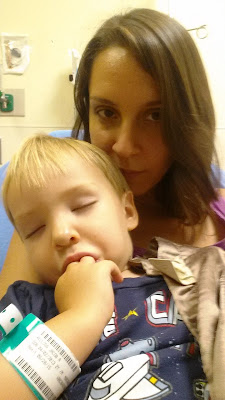 We were back to running around the yard enjoying summer in no time. Speaking of the yard, how cool is this little fungi I found out back?! 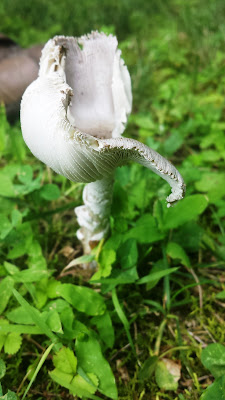 How cool WAS that fungi I should say...Jacob wanted to know what I was crouched down staring at. He also thought it looked cool and must have thought it would look cooler in his hand than lodged safely in the dirt. 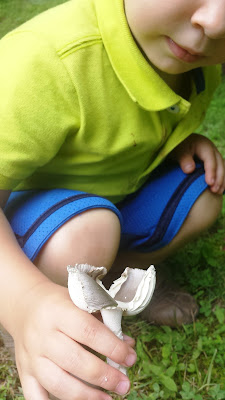 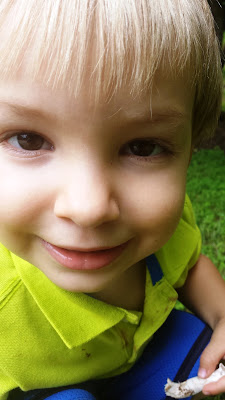 My other favorite thing in my yard in June was this mimosa tree which looks to me like a tree from a Dr. Suess book. Apparently it's invasive, but it smells amazing and looks cool so I'm not complaining. 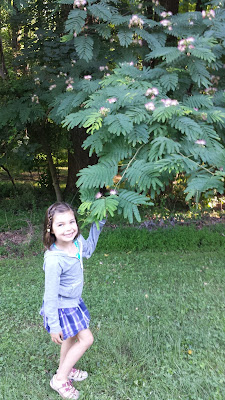 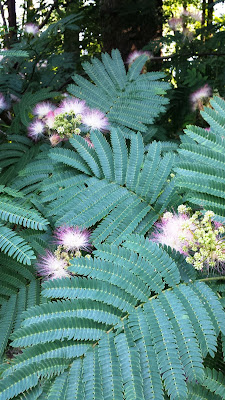