Every now and again I have a particularly rock star mama moment in which I feel capable of anything and everything. If you've ever felt like this, you know that it's a pretty rad way to feel. If you haven't had one of these moments, you should look for them a little more carefully. They're there if you  are open to the idea of occasional awesomeness. Humility and modesty are great in moderation, but too heavy a dose can be a real downer.

This afternoon spent backpacking Jacob and belaying Hannah while she cruised up wall after wall at Earth Treks was a good day in Terri town. 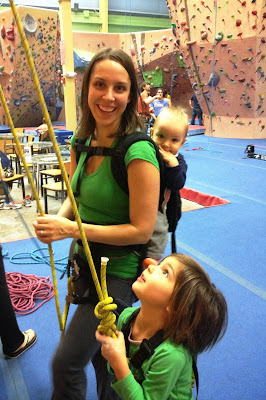 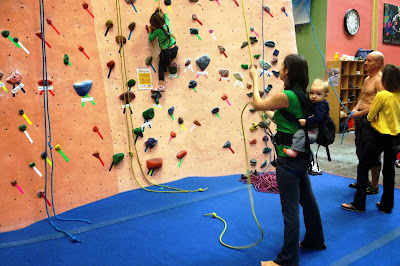 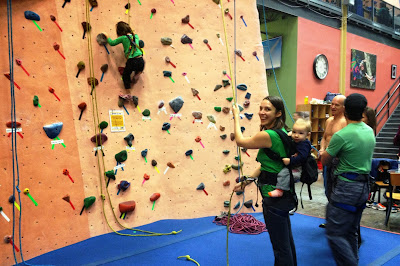 This was actually the second time that I took Hannah climbing and ended up wearing Jacob. This time was MUCH easier because I had two super awesome long-time climbing buddies to share the love. When young children are involved, three seems to be the magic number. With three, you've got a climber, a belayer, and a kid-watcher. Perfection. Three meant I got to climb for the first time in years. YES, I removed Jacob from my back prior to getting my figure eight knot on. Sheesh! What do you people take me for??

I only climbed two routes, but my weakened forearms screamed at me for the rest of the week for those two climbs. And I loved every second of that screaming.

Brandy was kind enough to indulge my not-so-humble rock star mama moment by taking pictures, so I'd have photographic evidence. Yes, I realize that there are millions of mamas out there who are rock stars every day with none of the glamor, and that my rock star moment pales in comparison to the harsh lives of mamas around the world. I'm a lucky, lucky lady for many reasons, and on this day particular day especially, I was feeling it. Rock star.
Posted by terri at 9:46 PM

Email ThisBlogThis!Share to TwitterShare to FacebookShare to Pinterest
Labels: climbing