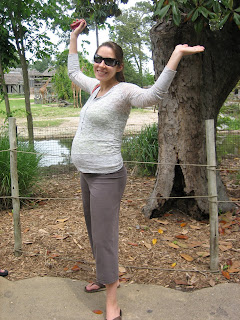 At long last, I present you with not just one, but two updated belly pics!! One is a little more risque so scroll down at your own discretion. This first one here was taken at the Virginia Beach zoo. There's a giraffe in the background but he's been covered by my flailing arms. The arms up is because I keep getting accused of sticking out my belly in pics. In my defense, what I'm tring to do is roll my shoulders back and have good posture, thus keeping my arms from covering the belly, but when you roll the shoulders back, you've also gotta tuck your tailbone to avoid the chest and belly jut. While I attempt to tuck my tailbone, there's only so much tucking I can get this bootie to do, especially these days with the added weight in front. So hands up it is!


Eric and I enjoyed a fun, relaxing weekend with my cousin and her hubby. On Saturday we went to the beach and attempted to relax while sandstorms pelted us with blankets of sand that felt like millions of little needles and horse flies attacked in between. It was quite the idyllic day at the beach!


In baby news, I'm way behind on my reading. No idea what's happening with Hannah right now except that she's moving a decent amount and has located my diaphragm which made my breathing more difficult than usual during the drive to Virginia Beach on Thursday. Upon arriving back in Baltimore, I learned just how dangerous scooping cat litter really is...I seriously had no idea. I figured that as long as I washed my hands when I was finished, it was fine, but apparently you inhale the toxins. My neighbor Amy is a nurse and spent some time in a...I think she called it a Knee-Q....(NECU??). Assuming it stands for newborn...emergency....Anyway, she saw tons of cases of this toxication in babies and her own fiance nearly died upon being born because his mom scooped while preggers. Our immune systems can fight off the bacteria, but the babies can't. So now I have a whole new thing to freak out about. She offered to come over and scoop it for me (here's where living with your husband comes in handy) which is really sweet, but makes me feel terrible! I hate how much I've had to lean on people these days and feel like my neighbors catch the brunt of it because they're so close so they're the ones who see me as I'm unloading heavy boxes from the car (that's how Amy and I started talking yesterday--when she came to my rescue as I attempted to unpack my car). I'm not used to having to depend on people so much and am really hating it!! I can't even begin to imagine how I will be able to pay everyone back for taking such good care of me.


Oh, and I got cards this year for mother's day!! Crazy, huh?? Both of my amazing neighbors got me cards and so did my mom (despite the fact that I did not get her a card....daughter of the year award anyone???).


As for the goal I set last week, no, I haven't accomplished it, but I do have a definite deadline now: end of this week. I've got a 9:45 appointment with the midwife who delivers at Mercy hospital this morning (hence the reason why I'm blogging right now rather than working). On Wednesday at 3:30 I meet with the midwife who delivers at home. I'm going to take a list of questions with me to that one (would take some to this one but I never got around to writing any down). Then I'll weigh the pros and cons of each with everyone who wants to hear me waffle back and forth. When I get tired of talking about, I'm going to close the discussion and just make a decision. I imagine that the decision is not going to be as easy as I had hoped (because the home birth midwife doesn't take my insurance), so I'm thinking I'm just going to go with my gut and choose the option that I'm most comfortable with. 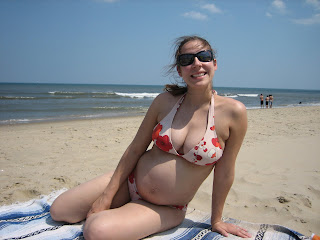