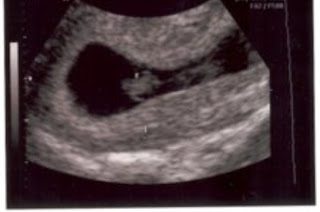 This is the other pic I attempted to upload last week...I know, it's equally as vague as the others. It's not my fault that it's only about the size of a green olive right now! I suppose green olives buried in a uterus don't photograph well...So today is week 9, and I received some interesting news from the midwife today. My urine tested positive for Group B Strep. GBS is a bacteria that lives in your privvy parts and your gut (according the midwife, it lives in my rectum, but the websites I'm reading says it can also live in the vagina and intestines). Awesome, huh? I asked her how one contrives such a bacteria and her answer was "It's just part of your natural flora." What a nice way of telling me that my guts are just naturally nasty! Anyway, the websites are equally as vague. They say only that it is not an STD and that 25% of pregnant women carry it and that most don't have any symptoms. Apparently antibiotics don't usually kill it, but are used to treat it anyway so I start penicillin tomorrow. After this bout though, I just deal with it until I go into labor. Prior to my water breaking, I'm going to have to get an antibiotic drip or something. What's the danger? Well, apparently there is a chance that when my water breaks, I can pass the disease on to the baby. GBS can lead to something as severe as meningitis to a mere fever in a newborn. So the pre-labor antibiotics are an attempt to prevent my transmitting this disease to the newborn.

I asked the midwife if there is anything else I can do to get rid of it and her only suggestion was to increase intake of garlic and vitamin c to beef up my immune system. I might look into garlic supplements because I am currently very disgusted by both garlic and onions and have no desire to taste them in anything. I suppose I'll start drinking Emergen-C more avidly as well.