Placenta gnoshing and other items in my post-partum toolbox

Let me start by saying that ingesting Jacob's placenta was not on my list of things to do until I got my henna tattoo and the artist, Crystalene, who was also pregnant at the time, asked if I intended to encapsulate the placenta. I'd never heard of such a thing, and my first thought went to the time capsule that my elementary school put into the newly constructed portion of the school. I wondered if she was talking about saving it in a box as a keepsake and then opening it 100 years from now to see what life was like a century ago. My mind raced down that path momentarily and then it occurred to me that it might have something to do with having it put into capsules to be taken as a supplement. Ding! Ding! Ding! Ding! Ding! We have a winner! No flies on me...

Of course I'd heard of people eating the placenta--who hasn't??--but prior to that discussion, I'd never taken the time to research why or to entertain the idea of doing so myself. I love a good alternative healthcare remedy though so I got online that night after putting Hannah to bed and read everything I could find on the subject. Like most cures that won't make the pharmaceutical companies big bucks, there isn't a lot of research/scientific study on the matter. It would be a difficult thing to study anyway since the success of ingesting it would have to be measured against what might have happened if it hadn't been ingested, and of course, there's no way of knowing what might have happened. 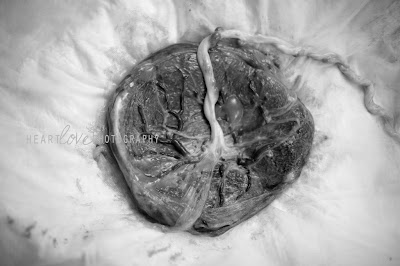 So, there's nothing sanctioned by the scientific community, but there are tons of women who, after suffering severe postpartum with one or more children, turned to placentophagy and found that it greatly improved their mood and energy level. It is also believed that placentophagy slows bleeding/hemorrhaging after birth, helps the uterus to contract to normal size, and increases milk supply.

I'm not gonna lie--there was a definite ick factor for me--but I'll do and eat just about anything if enough people tell me that it's healthy and there are no good reasons not to. I dug around for risks, but other than the ick factor, there aren't any. No possible harm can come from it if you're a healthy individual with no blood diseases. Some doctors say there's no reason to do so if you're a healthy person and eat a healthy diet, but what I found is that there's no reason not to give it a shot. Postpartum with Hannah wasn't terrible, but it was no Sunday stroll through the tulip gardens either, so I was game for trying anything that might help and couldn't hurt.

Encapsulating the placenta removes a lot of the ick factor because the organ is cooked and dried and then put into capsules that look like any other vitamin. Some of my reading suggested that cooking the placenta would remove some of the vital nutrients, which concerned me, so I decided to make a few smoothies with the raw placenta as well. The birth assistant (shown stretching out the umbilical cord in the photo below) made one for me shortly after giving birth, and then Eric made me another that evening and one more the following morning. I had no way of knowing it was in there since I couldn't taste it or see it. 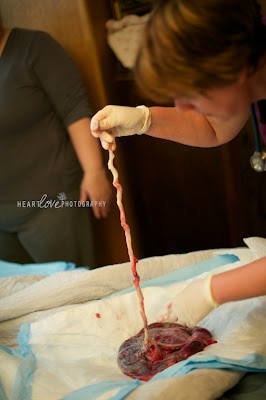 The evening after Jacob was born, Carmen from The Nurturing Root came over to start the encapsulation process. Joel and I hung out with her while she worked, asking questions and snapping photos (Joel was the main photographer).

In our emails back and forth, Carmen had explained that her training is derived from Traditional Chinese Medicine which states that after childbirth, women should consume warm foods (soups and hot teas) to balance their qi, and that's why they steam the placenta. Of course, steaming it also has the advantage of ensuring it's sterile, but I'm ahead of myself. First she sterilized my kitchen (legally the encapsulation process must occur in the placenta-owner's home) and let us take some pics of the placenta in its original form (minus the three small hunks that went into smoothies). 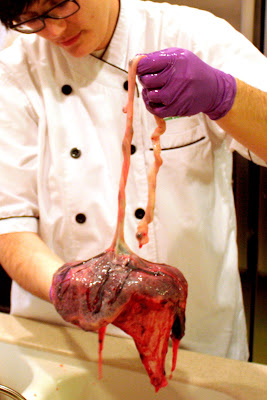 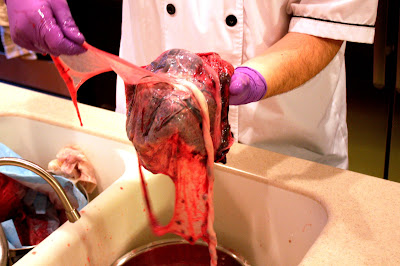 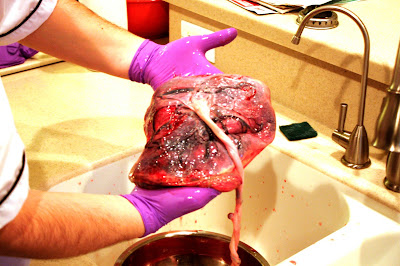 While she worked, she explained more of the theory behind placentophagy: Apparently (I say apparently because I have not looked this up to verify it and know little to nothing about how our bodies work so I'm trusting Carmen on this one), our hypothalamus is normally responsible for producing our hormones. When we get pregnant, the placenta takes over this duty. After birthing the placenta, there is about a 3-week gap before the hypothalamus kicks back into gear. Taking the placenta pills is a way to carry your body through that gap in hormones. Makes sense to me!

Her next step was to use a wooden skewer to poke and drain the blood vessels until the placenta looked like this: 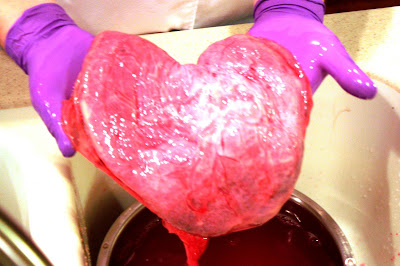 After the blood was removed, she steamed it. Apparently, my placenta, like my baby, is huge and had to be folded over in the pot whereas most fit in there quite nicely. 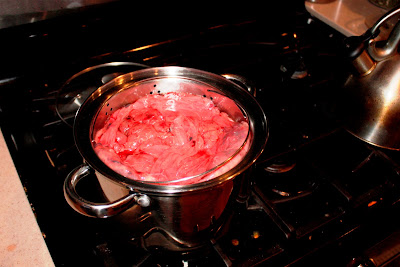 It shrivels up quite a bit as a result of the steaming. 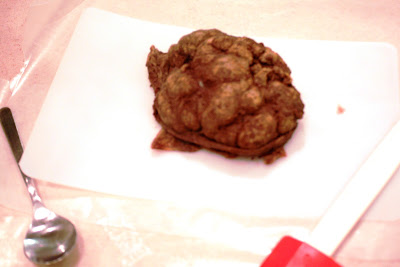 She then sliced it thinly and laid it out on parchment paper in her dehydrator. 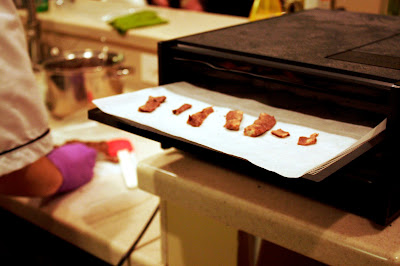 She also twirled up the umbilical cord and dried it for a keepsake for me. I have no idea what to do with a dried umbilical cord, but it's fun to talk to Hannah about.Carmen said that each umbilical cord is different and that what makes this one interesting is the little nodes--the darkened spots you see in the pic below. I had no idea that even something like an umbilical cord could be unique!! Human bodies are really quite amazing. 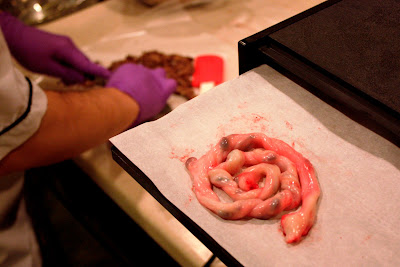 After cleaning up, Carmen left for the night. She returned the next morning and pulverized the dried strips in her Magic Bullet.... 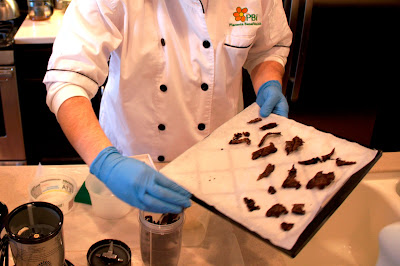 ...then poured the resulting powder into capsules. 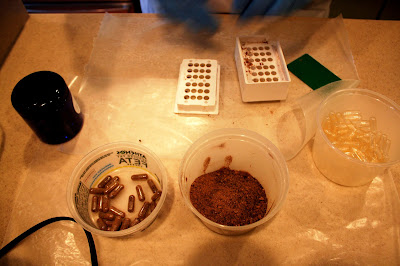 That placenta made 286 capsules which is a TON more than she usually gets, but I can't remember what her average is to tell you. It filled her biggest container and then filled a miniature mason jar about a quarter of the way up. 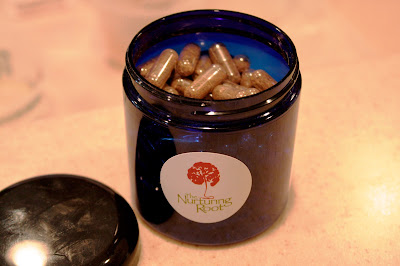 Instructions are to take two capsules three times a day for the first week and then to slowly drop down in the second and third weeks. I can't remember what to drop down to because I didn't drop. I figured I'd need more help so I have been taking two a day, three times a day until yesterday when I remembered that she also said to stop taking them if I get sick, and I woke up sick on Sunday so I went cold turkey today.

Whether or not it did all it proclaimed to do is hard to say, but I certainly feel like I had more energy and mental stability than last time, especially in that first week, though that could be as a result from the natural endorphins as well. I definitely have a ton of milk that came in fast, and I do think the bleeding slowed and then stopped much faster this time around than it did with Hannah.

Of course, this was not the only thing in my postpartum toolkit. Other things that have helped significantly over the past 3 weeks:

1. Amazing friends who brought us a ton of delicious food, including, Jeanne and Liam, Jess and Todd, Mary Cate and John, Amy and Nate, Dawn, Terrill...I hope I'm not forgetting anyone...

2. Amazing friends and family who have helped to keep Hannah entertained, specifically my mom and Amy who both came for days at a time and toted huge bags overflowing with various arts and crafts activities.

3.  Homeopathic arnica pilules prescribed by my naturopathic doctor. Arnica is believed to reduce swelling, bleeding, and bruising. I took it regularly until the bottle was gone.

4. An herbal postpartum tea that included nettles, oats, raspberry leaf, lemon balm, and hibiscus, orange, and lemon verbena for flavor (I love hibiscus so that was my request) made by Jenny, our local herbalist/apothecary. 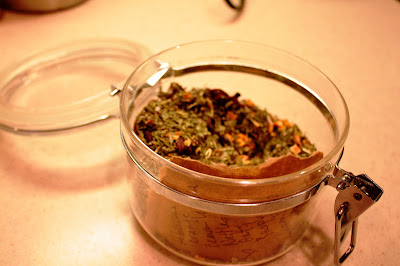 5. An herbal bath soak with calendula, lavender, comfrey, raspberry, rose, salts, and marshmallow also made my Jenny. I had it made as a sitz bath, but since I remained intact, I didn't need to do a sitz bath and used it as a regular bath soak instead. 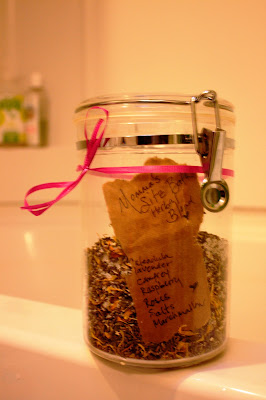 I loved feeling like I was bathing in a giant cup of tea, and it smelled awesome and was a super relaxing way to end every day, but it was a real pain to clean up. A lot of those flowers didn't go down the drain so I had to manually pick them up and throw them out. Maybe there exists some sort of giant tea ball that can be used in a bath?? That would be nice... 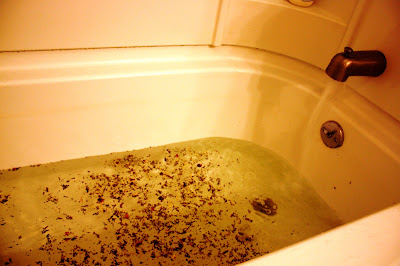 I think that's everything in my postpartum toolkit...I can definitely say that this time around has been easier, but I'm not going to lie--there have been tears. Big mama tears that come after more than an hour of little baby tears. Everyone said that the second would be easier, that he'd have to be, but I don't think he got that memo. He's shaping up to be every bit as spirited as his sister. Although I have the advantage this time around of knowing what's bothering him, there's often nothing I can do to fix what ails him. He has terrible reflux and is always barfing or needing to barf so I do what I can to prevent (nurse him upright, give him gripe water, burp him constantly, hold him on his belly, bicycle is legs, do baby massage on his belly) and soothe that, but it's still there.

He also fights sleep just like his sister did so even though I now know when he needs to sleep and try to get him to sleep before he's over exhausted, he still ends up awake, exhausted, and crying for nearly 2 hours every morning and evening. I try every trick I know to get him to sleep, and every time, a different trick works, or maybe none of the tricks work and he just eventually konks out regardless of what I'm doing. The only thing that has fairly consistent results is putting him in the Ergo carrier and walking around the house with a bounce in my step. All-in-all, it's completely and utterly exhausting and frustrating, more so because I've already been through this before and thought I'd paid my dues.

I have no idea how to summarize these super lengthy post other than to say that if I had it to do over again (and please know that I have NO intention of doing this again), I would do it all exactly the same. I definitely think my postpartum toolkit (in addition to the last year or so of therapy and the fact that I've gone through a lot of this before) made this post-baby period easier and happier, and I definitely healed faster physically.
Posted by terri at 9:14 PM